This article is using {{Card template}}.
See Help:Style guide/Card for how to edit this kind of article.
Edit this article
Bloodsail Cultist
38920 • OG_315
Regular 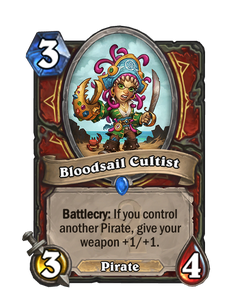 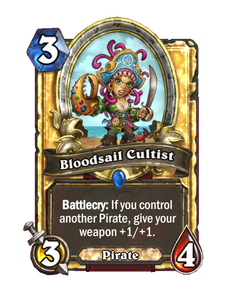 They're really just in it for the Blood Parrot. 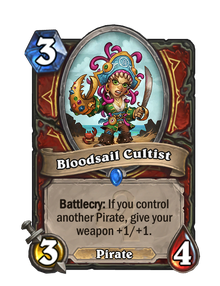 Bloodsail Cultist is a rare warrior minion card, from the Whispers of the Old Gods set.

This card has strong Pirate and weapon synergy. Play it in a Pirate Warrior deck that features a good selection of weapons for a boost to both the power and longevity of your current weapon. It is especially effective when used together with early game cards such as N'Zoth's First Mate or Fiery War Axe.

Note that this card has an extremely strong stat line which is difficult for most classes to remove in the early game. Despite this, in non-Pirate Warrior decks, this card is usually eclipsed by the less situational Frothing Berserker.

Summon
By claw and cutlass!

This gnome member of the Bloodsail Buccaneers appears to have succumbed to the influence of the Old Gods - albeit in her own salty, jewel-encrusted way.

The bloodthirsty corsairs of the Bloodsail Buccaneers are the bane of many a merchant in the high seas and are sworn enemies of Booty Bay. Their base is the Bloodsail Hold on the Plunder Isle.

They now plot to plunder and cripple the Steamwheedle Cartel-controlled port city of Booty Bay, currently under the protection of the Blackwater Raiders. It is likely the Bloodsail Buccaneers have come to take advantage of the city’s current loss of its fleet off the coast of the Arathi Highlands, in which two of its ships were destroyed and the remaining ship forced to find shelter in a cove where its crew currently fights to survive skirmishes against the Daggerspine naga.