This article is using {{Card template}}.
See Help:Style guide/Card for how to edit this kind of article.
Edit this article
Bloodreaver Gul'dan
43415 • ICC_831
Regular 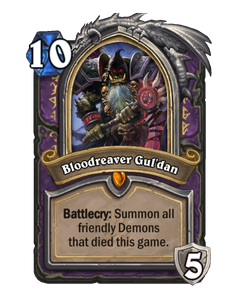 "Still you refuse to bend your knee? None can escape death, you old fool. And in death… all will serve me…" 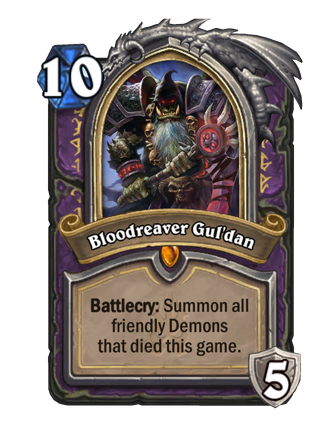 Bloodreaver Gul'dan is a legendary warlock hero card, from the Knights of the Frozen Throne set. 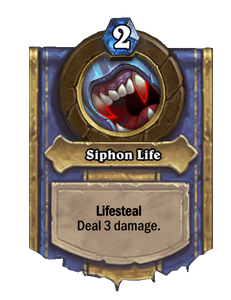 With the ability to both swarm the board with threats and convert your Hero Power into a more powerful ability, Bloodreaver Gul'dan is more than worth his 10 Mana cost. If played in a deck filled with Demons, he can instantly flood the board with a horde of powerful minions. Demons with high base stats like

Dread Infernal are strong options, as well as minions with ongoing effects like

As the demons summoned by Bloodreaver Gul'dan ignore their Battlecries, Demons with negative battlecries such as

While Bloodreaver Gul'dan works well in any deck that runs a high number of demons, it works most efficiently when it's able to summon multiple high value demons. This can be obtained by only running a handful of high value demons such as Voidlord and Doomguard. Cards that can copy minions like

Carnivorous Cube can help in this task, as any copied demon that has died will be included in the pool of summoned demons.

In more aggressive decks, Bloodreaver Gul'dan can still be a valuable tool. By playing him late game, you can revive your deceased copies of

Voidwalker, Despicable Dreadlord, Doomguard, and any other demons you've played. While the impact will not be as great as when used in a slower controlling deck, this can still provide some last-minute push to finish an aggressive game.

Even once Bloodreaver Gul'dan has filled your board with powerful minions, he still has more benefit to him. His Hero Power,

Siphon Life, removes the Warlock's late-game weakness of having a useless Hero Power when nearing Fatigue and is an excellent control tool, as it can not only finish off weakened minions but also supply your hero with a steady stream of health. If you summon Gul'dan when your opponent has little opportunity to quickly finish you off, the game can rapidly snowball in your favor thanks to Siphon Life.

Demons that can be revived by Bloodreaver Gul'dan[]

Summon
A bargain forged in blood and shadow.[1]

Bloodreaver Gul'dan is the death knight version of

Rexxar, who one day discovered that his forest was being corrupted by the death knight

Malfurion the Pestilent. Though Rexxar attempted to defeat the corrupted druid, Malfurion's insects chewed apart his arrows and poisoned his animal companions. With sorrow in his heart, Rexxar swore he would do anything for the power to do what was right. In response, a frosty wind howled and the shadow of a twisted throne fell over him. In its place was only Gul'dan, who had just what Rexxar wished for. Gul'dan offered him a way to protect what he held most dear, and all he asked for in return was a single life. Rexxar accepted the offer, and was transformed into

Deathstalker Rexxar. Gul'dan instructed him on how to give immortality and unholy power to his beloved beasts. With his new powers, Rexxar forged an army of Zombeasts and managed to overpower Malfurion; though just as Rexxar moved in for the killing blow, Malfurion revealed that he himself had simply been trying to protect the forests as well. He had discovered a dark presence siphoning life from the wilds, and a grove of dead wolves with bite marks upon their necks. At that point in time, a hooded stranger had offered him the power to save the land. It had become apparent that Malfurion and Rexxar had fallen victim to the same force. As the Pompous Thespian finishes his tale, a member of the audience asks what had happened to the "Vampire Orc". The storyteller replies that no one knows what became of Gul'dan, but that it was rumored that even he served a greater evil, and that his corruption of Malfurion and Rexxar had merely been on the orders of his dark liege.

The bloodreaver's vampirism, as well as his title and appearance, strongly suggest an association with the Blood death knight specialization.

"In undeath, some death knights find a special affinity for the blood and bone of the living. They carve into their enemies, sustaining themselves with deadly sanguine strikes, while using the bloody, shattered remains of the dead to fortify their own defenses. These crimson-soaked knights bend the very rules of mortality to control the frontlines of the battlefield."