Hearthstone Wiki
Register
Don't have an account?
Sign In
Advertisement
in: All cards, Wild format cards, Pages with no result queries, Ogre art

This article is using {{Card template}}.
See Help:Style guide/Card for how to edit this kind of article.
Edit this article
Bloodlust
1171 • CS2_046
Regular 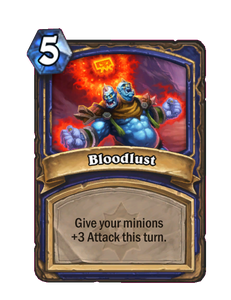 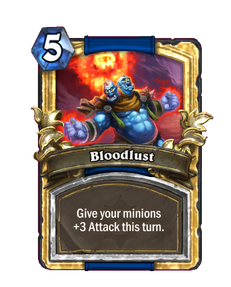 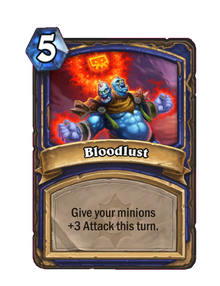 Bloodlust is a shaman spell card, inducted into the Legacy set, formerly from the Basic set. 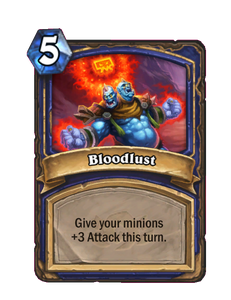 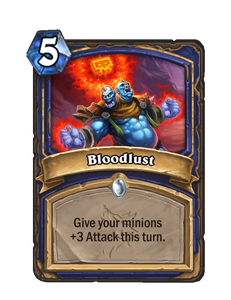 Regular and golden Bloodlust are uncraftable and cannot be crafted or disenchanted.

As a possible game-winner for the shaman, Bloodlust needs to be set up by maximizing the number of creatures in play, making it very powerful with Murloc decks. To avoid creature attrition and maintain a large pool of minions, the shaman may prefer to deal damage to the opponent's creatures directly by using cards like Lightning Bolt or Lightning Storm.

Bloodlust was introduced in Warcraft II: Tides of Darkness, as a spell that Ogre Mages had to increase the move and attack speed of fellow units. The spell was later carried over to the Warcraft III Shaman, with the same effect. The Warcraft III incarnation of the spell got carried over to DoTA and its sequel as the Ogre Magi skill Bloodlust.

The spell was later introduced to World of Warcraft in the Burning Crusade expansion. The WoW version of the spell grants a temporary haste buff to all party and raid members, increasing the rate at which they can deal damage and cast spells, making it very useful for DPS boss phases, or to survive all-out assaults in PvP. Like its Hearthstone incarnation it is a temporary effect, requiring players to make the most of it before it expires, but is nonetheless an extremely powerful buff. A Horde-only spell available to the originally Horde-only shaman class, an Alliance counterpart to Bloodlust, Heroism was later introduced for Alliance shamans, featuring exactly the same effect.

In Warcraft II this spell multiplied a unit's attack by 3. Hearthstone mimics that slightly in that the Hearthstone spell gives all your minions +3 (rather than *3 like War2). This effectively mimics the "Lusted group of ogres" feel where you get swarmed by a bunch of bloodlusted ogres. 9 lusted ogres could easily overwhelm 18 Human Paladins or 18 non-lusted ogres.

This card's flavor text - "blaarghghLLGHRHARAAHAHHH!!" - attempts to render a spelling for the distinctive soundbite used for Bloodlust. Bloodlust and its associated soundbite was first introduced in Warcraft II. A different soundbite was used for Warcraft III; this soundbite would later become the iconic sound associated with the ability, and was the one that was carried over into World of Warcraft, and later Hearthstone.