This article is using {{Card template}}.
See Help:Style guide/Card for how to edit this kind of article.
Edit this article
Bloodhoof Brave
38738 • OG_218
Regular 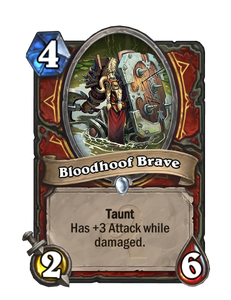 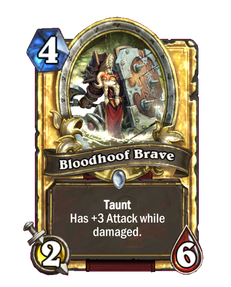 He thought the set was called "Flippers of the Old Cods" and hungrily volunteered to be in it. He is definitely going to get his hearing checked. 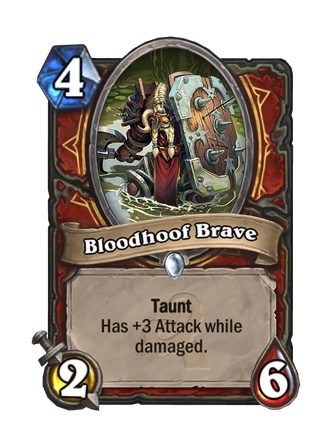 For the event version of this card, see Bloodhoof Brave.

Bloodhoof Brave is a common warrior minion card, from the Whispers of the Old Gods set. 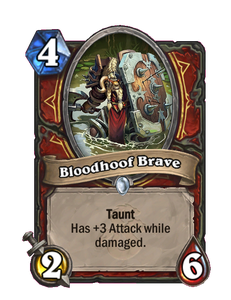 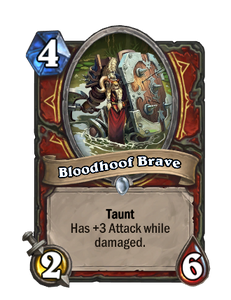 Bloodhoof Brave is an improved

On top of that, when played on-curve the extra health makes it much harder for your opponent to remove this minion without activating the Enrage effect.

Bloodhoof Brave is a member of the Bloodhoof tribe, led

The Bloodhoof tribe of tauren reside in the grasslands of Mulgore. They are members of the Horde and were led by

Cairne Bloodhoof who presided over the tauren capital of Thunder Bluff. After his manufactured defeat by Magatha Grimtotem at the hands of

Baine Bloodhoof is the new High Chieftain of the Bloodhoof clan and leader of the unified tauren tribes of Mulgore. Baine can now be found on the High Rise in Thunder Bluff, the former seat of his father. The tauren can be found in all areas of the world, trying to restore the balance of the world which was lost during the occupation of the Burning Legion. The tauren owe allegiance to then Warchief Thrall and the Horde due to their assistance in ridding Mulgore of the marauding centaurs, thus giving the tauren a place to call home. However, along with many other of the Horde races, the tauren have become wary of the orcs, after the defeat of their former High Chieftain, Cairne Bloodhoof by Garrosh Hellscream, albeit in a fixed contest. Baine Bloodhoof made an uneasy peace with Hellscream and the Horde after an apology by Garrosh but are still wary of the orcish core of the Horde along with the trolls and the Forsaken, neither of which trust the leadership of Hellscream.