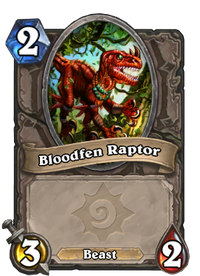 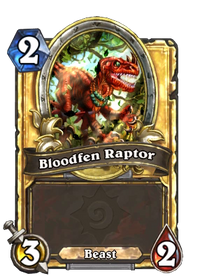 Bloodfen Raptor is a neutral minion card, inducted into the Legacy set, formerly from the Basic set. 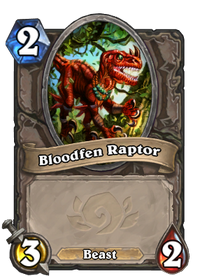 Two copies of regular and golden Bloodfen Raptor are automatically given after the player completes the Ranked's New player experience system, unlocking Wild and Classic format.

Bloodfen Raptor is a basic 2-mana Beast minion ideal for basic hunter decks, due to their synergy with Beasts. It's a slightly more aggressive version of River Crocolisk. The League of Explorers card Huge Toad is a strictly superior option due to its useful Deathrattle. For hunters, the Grand Tournament card King's Elekk and the Journey to Un'Goro card Crackling Razormaw also provide strictly better options as they have the same stats, cost and minion type as Bloodfen Raptor, but with an added effect.

The Bloodfen Raptor is not generally recommended for non-Beast-synergy decks, with cards such as Acidic Swamp Ooze, Faerie Dragon, Sightless Watcher and Recombobulator offering additional abilities with the same stats for the same cost.

Raptors are one of the most iconic beasts of the Warcraft universe and can be found both in Azeroth and Outland. Bloodfen Raptors are tameable level 35-36 mobs found in Dustwallow Marsh.