Blood of The Ancient One

This article is using {{Card template}}.
See Help:Style guide/Card for how to edit this kind of article.
Edit this article
Blood of The Ancient One
38567 • OG_173
Regular 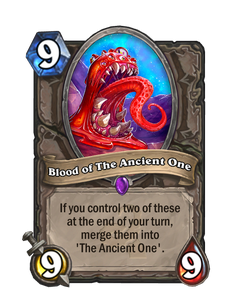 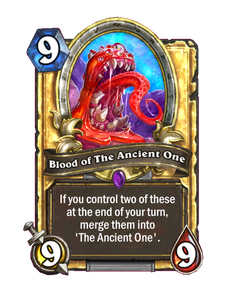 Dimensions: Full • 330 x 410px
If you control two of these at the end of your turn, merge them into 'The Ancient One'.
Flavor text

Add two cups of Blood of the Ancient One to one cup of lemon juice. Add just a dash of sugar and stir. Delicious! 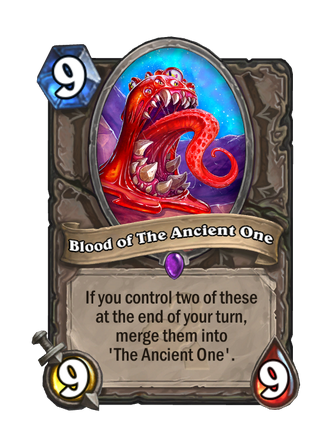 Blood of The Ancient One is an epic neutral minion card, from the Whispers of the Old Gods set. 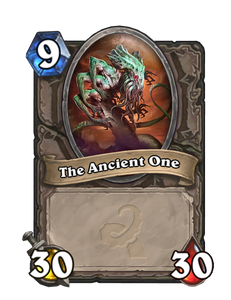 Blood of the Ancient One is close to a win condition in itself. However, getting both Bloods onto the board at the same time may present a challenge, largely due to the card's 9 mana cost and likely targeting by enemy players.

Emperor Thaurissan can help, as can extra mana from sources such as

The Coin (at least in combination with cost reduction effects). Put into battlefield effects can be extremely helpful, such as

Barnes. If cost reduction cannot be achieved satisfactorily then hiding it behind a large Taunt is a good alternative. Copy effects like

Gang Up can be helpful in providing extra chances to summon The Ancient One.

Herald Volazj is especially effective; if played with a single Blood of The Ancient One on your board, The Ancient One will be summoned at the end of your turn, almost making Volazj a substitute Blood. Another noteworthy synergy is the Rogue's

Shadowcaster, which will create a 1-mana 1/1 copy of an already existing Blood that can easily be used to summon The Ancient One.

Sonya Shadowdancer can be used to exploit the forced death phase and get you a extreme amount of The Ancient ones.

Despite its 30/30 stats, don't forget that a simple

Sabotage can effortlessly remove your The Ancient One, while an

Mind Control can turn it against you. Due to the destruction of the Bloods in its creation process, and the effort required to pull off the combo, this can leave the player in very poor position if the opponent has a good counter.

Because The Ancient One is summoned at the end of the turn, the opponent has a full turn to counter it before the player can use it to attack. Conversely, the opponent cannot directly stop the player from summoning The Ancient One, other than through Secrets, except by removing Bloods whenever they see them. With cost reduction effects or cards like Varian Wrynn, two Bloods can be put into action in a single turn, making it impossible for the opponent to prevent The Ancient One's summoning.

Many Priest cards can preform such strategies, with cards like

The Old Gods, even while chained beneath the crust of Azeroth, led massive armies and empowered fearsome generals.

The Ancient One was vanquished long ago, but it's hard to keep the minions of the Old Gods down, and with enough of its blood, you can herald the return of the Old Gods' greatest creation![14]

The Ancient One resembles the old god Y'Shaarj, and the old god's minions like the

Mindflayer Kaahrj within the Twilight hammers cult found inside the Ulduar raid protecting Yogg'saron's chamber, and the K'thir under N'zoth within Kul'tiras. The Ancient General itself, however, is unique to Hearthstone. It is described as "one of the generals of the Old Gods".[15]

It is not uncommon for the blood of powerful beings, such as

Deathwing, G'huun or Y'Shaarj, to take on a form of semi-sentience on their own by forming into mobile slime creatures. The Blood of The Ancient One appears to be consistent with this theme and resembles the card "