This article is using {{Card template}}.
See Help:Style guide/Card for how to edit this kind of article.
Edit this article
Blood of G'huun
61434 • DMF_053
Regular 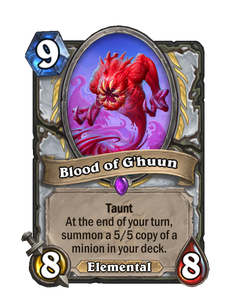 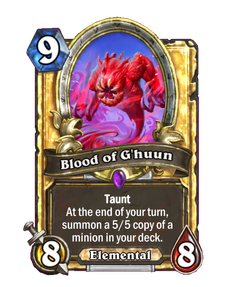 An attempted cure becomes disease, blooming and thriving as rot and decay. 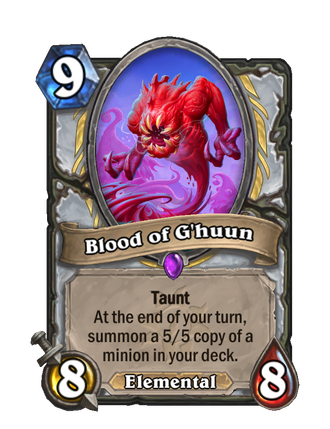 Blood of G'huun is an epic priest minion card, from the Madness at the Darkmoon Faire set.

Blood of G'huun is best played in decks with the resurrecting cards, particularly Big Priest. This is an improved version of

Y'Shaarj, Rage Unbound since it does not drain the deck and also has a Taunt, providing a better protection against aggro decks.

Blood of G'huun usually first appears on the board by

Idol of Y'Shaarj. Then it starts to summon copies of itself or other useful minions (mainly Khartut's Defender,

Scrapyard Colossus). The further board control is provided by resurrecting Blood of G'huun.

Due to its effect, which can quickly turn into a snowball, Blood of G'huun rarely stays on the board more than one turn and is usually removed by transforming effects (e.g.,

The appearance of Blood of G'huun is identical to Vectis, a boss in Uldir.

This connection is further reinforced by Vectis being called Blood of G'huun in the early Alpha for Battle for Azeroth.