This article is using {{Card template}}.
See Help:Style guide/Card for how to edit this kind of article.
Edit this article
Blood Razor
42700 • ICC_064
Regular 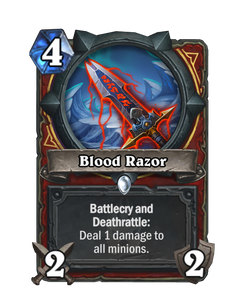 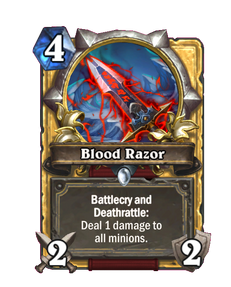 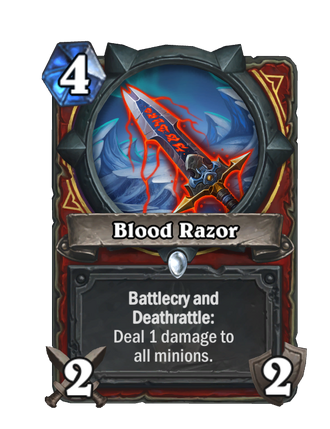 Blood Razor is a common warrior weapon card, from the Knights of the Frozen Throne set.

Blood Razor is very reminiscent of the Wild card

Death's Bite. The damage potential of Blood Razor is weaker by comparison, however the additional

Whirlwind-style effect from the Battlecry makes it a far more consistent activator for cards that can utilize the effect. As a result, the card should likely be considered for it's double area of effect ability, rather than the weapon damage itself. Blood Razor can work well in slower Warrior decks, and provides a flexible activator for cards with Enrage, as well as cards like

Sleep with the Fishes and

In Arena, Blood Razor represents a large amount of value. Weapons are always highly desired in the format, thanks to their ability to remove multiple minions, and the Whirlwind effect allows it to be used to potentially activate extra value-generating effects, as well as remove and damage your opponent's minions.

Bloodrazor is a one hand sword with a bleed proc. The blade is a world drop.

Blood Razor's Hearthstone artwork appears to be that of a more traditional death knight runeblade.