This article is using {{Card template}}.
See Help:Style guide/Card for how to edit this kind of article.
Edit this article
Blood Knight
755 • EX1_590
Regular 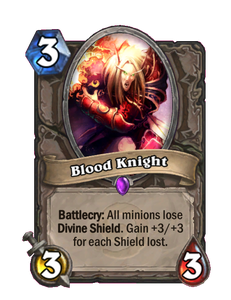 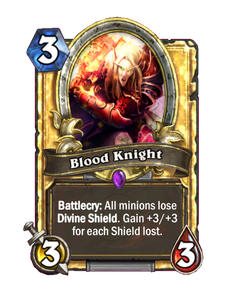 The Blood Knights get their holy powers from the Sunwell, which you should NOT bathe in. 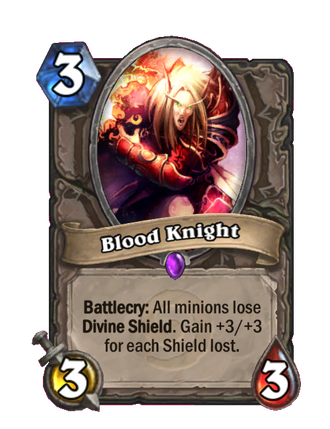 Blood Knight is an epic neutral minion card, inducted into the Legacy set, formerly from the Classic set. 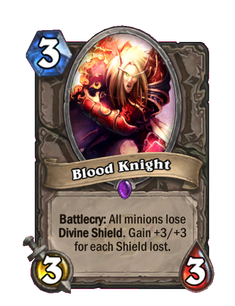 This 3/3 card for 3 mana can be an incredible game-changer. If played while minions with Divine Shield are on the board he removes all existing ones and buffs himself with +3/+3 per shield removed. So if 3 minions are on the board with Divine Shield he would become a 12/12 for only 3 mana. Very good in a paladin deck or playing versus a paladin. Against decks with the right type of removal, this minion can be risky to play. If you have both this card and several other Divine Shield minions in your hand and on board, it may be correct to not consume all Divine Shields, but to play Blood Knight first and then some Divine Shield minions from your hand. This way you do not risk a great majority of your board being neutralized if your opponent has a cheap way to remove your Blood Knight.

The maximum buff Blood Knight's Battlecry can grant is +39/+39, with 13 other Divine Shield minions on the board, resulting in a 42/42 Blood Knight.

Steward of Darkshire combined with

Stand Against Darkness will give you 5 Silver Hand Recruits with Divine Shield. However, you need too reduce the cost of at least one of the cards in order to play Blood Knight for a fearsome 18/18.

The Blood Knights are a group of blood elf paladins serving as Silvermoon's equivalent of the Knights of the Silver Hand. They are the backbone of the blood elf army. With the strong support of the magisters and the blood elven guard force, the former of which had a hand in their creation, the Blood Knights are a popular group within sin'dorei society. They are led by their matriarch and founder,

Lady Liadrin. As high elves, many future Blood Knights were members of the Church of Light, many of whom became priests and a few became paladins. Several other Blood Knights were once members of the Royal Guard, proud defenders of high elven society. After the Third War, the vast majority of the high elves took up the name "blood elves" in honor of their slaughtered people, and in the wake of their ancient kingdom's destruction, many of the elves of Quel'Thalas came to view the Holy Light with contempt. This led to a great number of the blood elves losing their faith, and in turn, their Light given powers, coming to believe that the Light had failed them in their homeland's hour of greatest need. Thus, they needed to find a new way to access the light. They did this by sapping Light energy from the captive naaru M'uru held beneath the Blood Knight headquarters. In a mad lust for power, Kael'thas Sunstrider sent the felblood to attack Silvermoon City and seize M'uru for his own personal uses. The Blood Knights vowed to aid A'dal and the Shattered Sun Offensive in defeating Kael'thas, Kil'jaeden, and restoring their homeland to its glory. With the Sunwell's rebirth, the Blood Knights have chosen to embrace it and to forge for themselves a new identity as they lead their people into a more promising future.

"... the defenders of Quel'Thalas, the faithful servants of Silvermoon, and the true masters of the Light."