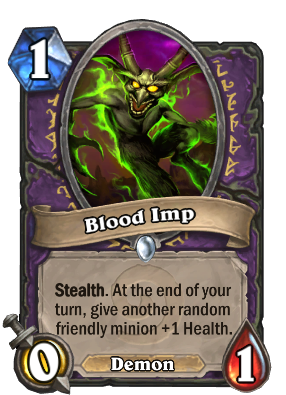 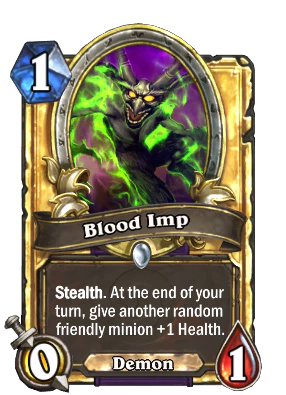 Stealth. At the end of your turn, give another random friendly minion +1 Health.
Flavor text

Imps are content to hide and viciously taunt everyone nearby.

Blood Imp is a common warlock minion card, inducted into the Legacy set, formerly from the Classic set. 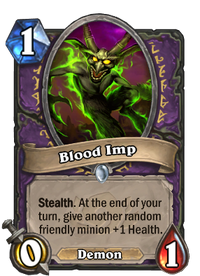 Blood Imp can be obtained through Classic card packs, or through crafting.

Blood Imp is an excellent early drop, as it keeps reinforcing whatever other minions you play. Its Stealth allows it to stay out of reach of targeted attacks while steadily reinforcing your other minions. It is of little to no value without a friendly minion to buff, but with the right targets can quickly turn weaklings into solid defenders, and buff minions' Health just high enough to survive planned attacks, thwarting the opponent.

Blood Imps cannot be targeted by enemy attacks or effects, but can be hit with random target and AoE attacks, such as Arcane Missiles, Cleave and Hellfire. Enemy players will generally want to remove Blood Imps as soon as possible, and when playing against warlocks may save such abilities for this purpose.

This card is generally weaker than Witchwood Imp, as the latter can attack and gives you more control over what receives the buff. One big reason to use this card over the latter imp, is when also running N'Zoth, the Corruptor, so as to avoid the possibility of pulling a weak, low-impact Deathrattle minion.

This card should not be run alongside Bloodreaver Gul'dan to keep your resurrect pool good.

Summon
Do I have to?

Attack
Sure, send the little guy!