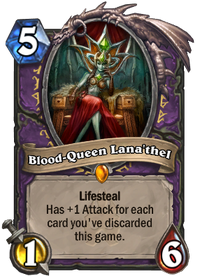 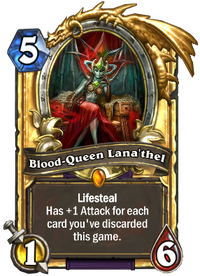 Lifesteal
Has +1 Attack for each card you've discarded this game.

As a young blood-princess she learned the proper way for a lady to curtsy, how to address fellow members of royalty, and how to bite them.

For the boss of the same name, see Blood-Queen Lana'thel (boss).

Blood-Queen Lana'thel is a legendary warlock minion card, from the Knights of the Frozen Throne set.

Blood-Queen Lana'thel can be obtained through Knights of the Frozen Throne card packs, or through crafting.

This card is ideally used for Discardlock decks. While this card can potentially grow into a 10/6 Lifesteal minion, her main drawback is that she can be easily discarded. Note that Lana'thel's discard counter works while she is in your deck, so aim to draw her in the late game to allow her to reach her full potential.

Blood-Queen Lana'thel, pronounced (LEH-nuh-THEL), is the leader of the San'layn, a group of Kael'thas' greatest followers, raised in undeath by the Lich King and transformed into vampiric beings.