"Blingtron is ready to rumble! He changes your hero power to "Get a random weapon." AND he gives you random weapons!"

Blingtron's Beauteous Brawl is a Tavern Brawl. It debuted on February 4, 2016. For exact times, see the schedule.

This Brawl sees players doing battle with custom decks of any class. Each player starts the Brawl with 10 Armor (in addition to 30 Health), a Foam Sword equipped, and their usual Hero Power replaced by Cash In. The special weapon enchantment "Blingtron's Blade" is applied to the initial Foam Sword and any weapon generated by Cash In. The enchantment causes a new weapon to automatically be equipped when the enchanted weapon is destroyed, as well as granting the enchantment to the new weapon. Both Cash In and "Blingtron's Blade" equip a random collectible weapon. 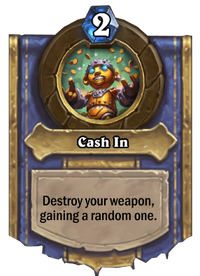 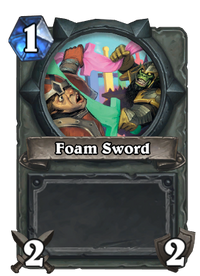 Listed below are all collectible weapons currently available in Wild format.

As of The League of Explorers, the average collectible weapon has 2.9 Attack and 2.8 Durability. Of the 23 weapons, 18 have card text or abilities, 5 have Battlecries, and 3 have Deathrattles. Each has a 4.3% chance of being equipped by either Cash In or "Blingtron's Blade".

Listed below are all cards which have a specific synergy or interaction with weapons. Cards which simply generate new weapons can be found here.

Rogues have the largest number of weapon-related cards, with Buccaneer, Goblin Auto-Barber, Tinker's Sharpsword Oil, Blade Flurry and Sabotage. The only other weapon-related class cards belong to warriors, with Orgrimmar Aspirant and Upgrade!.

As a rule, almost any card which gains or provides an effect from the opponent having a weapon equipped is more effective during this Brawl. Harrison Jones is a very strong and reliable card, although his Battlecry will usually only draw 1 or 2 cards. Acidic Swamp Ooze is useful for removing especially potent weapons, or for triggering enemy weapon Deathrattles at especially inopportune moments, but otherwise is of no special use. Sabotage is guaranteed double effectiveness, although again the weapon destroy effect is only of situational use. Bloodsail Corsair is likewise of little use.

Bloodsail Raider and Dread Corsair are both strong early cards, although they will likely be destroyed before long. If played early enough, their 3 Health can allow them to require two hits from the opponent's Foam Sword, while in the later game the opponent will usually have a weapon capable of dispatching them with a single blow. The rogue's Goblin Auto-Barber is less sturdy but is still a good early option, especially if increased Attack is required for removal. Orgrimmar Aspirant is the warrior's sturdier and more ongoingly useful version.

While weapon-related cards are the main highlight this Brawl, Attack-related cards such as Savagery and Lowly Squire can be just as effective.

Extra care should be taken regarding Cursed Blade. With a 4.3% chance of gaining it each time a new weapon is generated, its damage-doubling effect can easily boost the opponent to lethal. If it is acquired through expending the Durability on your current, it is often wise to immediately Cash In for a new weapon, to prevent the opponent from making the most of your vulnerability during their turn. When grasping for a few extra points of damage, it is possible to destroy the opponent's weapon through effects like Sabotage, Harrison Jones or Acidic Swamp Ooze, on the chance that they may be equipped with a Cursed Blade in its place.

The chance of equipping Sword of Justice may make it worth attacking, in order to consume your weapon's final point of Durability, or using Cash In, prior to summoning minions. The presence of Powermace and Cogmaster's Wrench gives a small but potentially significant tactical advantage to Mech-oriented decks.

Attack-boosting effects like Deadly Poison and Tinker's Sharpsword Oil are especially useful with weapons with long Durability. Doomhammer combines 8 Durability with Windfury, providing not only an excellent multiplier on the benefits of such effects but the ability to make use of the bonus damage twice each turn.

As a counter-strategy, effects that can prevent your opponent's hero or minions from attacking you directly can help you in outlasting your opponent's assaults, such as minions with Taunt. The Mage can be an excellent class to consider for this role with the variety of Freeze spells and minions at her disposal, such as Snowchugger, Water Elemental and Ice Lance. Control decks in general can be effective in this Brawl.

One important strategic decision during this Brawl is when to use Cash In. The table above lists all possible weapons, and can be ordered to show stat ranges, etc. Try to get a good idea of how likely Cash In is to provide a superior or inferior option if used. Both stats and special abilities are worth considering, with a few special synergies available.

Lightning Jolt is generally far superior to Cash In, making it usually a good idea to replace Charged Hammer as quickly as possible if generated. The downside is the potential to get stuck with a 1-Attack weapon (or worse yet, Cursed Blade) with no ready way of replacing it. This drawback aside, the power of Lightning Jolt can provide a good reason to use Cash In as often as possible, in the hopes of gaining Charged Hammer.

Aside from the presence of weapons, the other key strategic element in this Brawl is the lack of each class' regular Hero Power. This affects deck viability as well as class identity to some extent, with warriors unable to Armor up, shamans unable to summon their Totems, and mages unable to 'ping' minions, for example. This especially reduces hunters' reliable damage output, warriors' defensive ability, and warlocks' card draw potential. Decks based around these powers will likely have a harder time in this Brawl, although the weapons provided can compensate in some cases, such by providing the means for ample amounts of direct damage.