This article is using {{Card template}}.
See Help:Style guide/Card for how to edit this kind of article.
Edit this article
Blessing of Wisdom
1373 • EX1_363
Regular 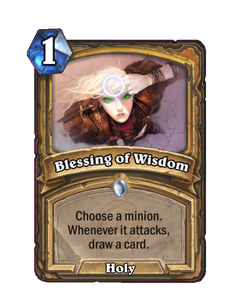 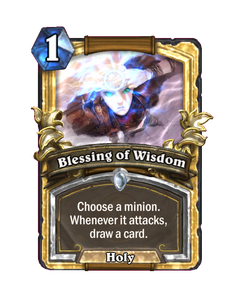 Apparently with wisdom comes the knowledge that you should probably be attacking every turn. 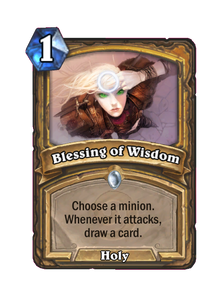 Blessing of Wisdom is a common paladin spell card, inducted into the Legacy set, formerly from the Classic set. 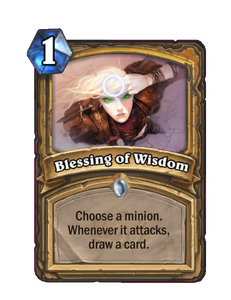 Blessing of Wisdom is a simple card with multiple uses. It can be used on tough minions for high uptime, on the few neutral minions with Windfury for multiple cards in one turn, or on enemy creatures to force bad trades (while the opponent tries to get rid of it). On a side note, this card can be used twice on a minion and if it attacks, you will draw 2 cards.

If you're going to cast it on one of your own minions, it's best to be able to attack with the minion that turn, so you will at least break even in terms of cards. If you use it to flush excess mana on a minion that's exhausted, you can bet your opponent will remove it if at all possible.

While more obviously used upon one of your own minions, this spell can also be used upon enemy minions to great effect. This can be used defensively to make an opponent think twice about attacking with a dangerous minion, or can force them to draw cards for you in order to make use of their minion. This buff will make them more likely to sacrifice that minion in preference of another, but can also be removed with a Silence.

A quirk of this spell is that if your opponent uses a Faceless Manipulator to copy your minion with this buff, the copied minion's attacks will still grant you cards, and not your opponent. The card draw recipient is set at time of casting, and isn't simply the current owner of the minion. This is also important when considering taking control of a minion buffed with Blessing of Wisdom using a mind control effect such as Mind Control.