This article is using {{Card template}}.
See Help:Style guide/Card for how to edit this kind of article.
Edit this article
Blessing of Kings
943 • CS2_092
Regular 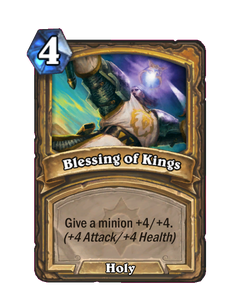 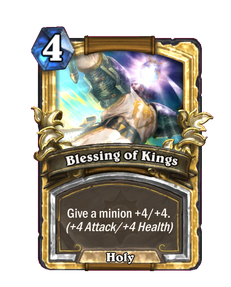 Given the number of kings who have been assassinated, are you sure you want their blessing? 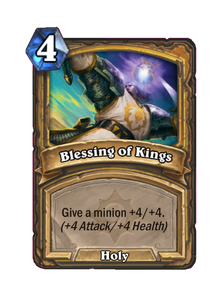 Blessing of Kings is a paladin spell card, inducted into the Legacy set, formerly from the Basic set. 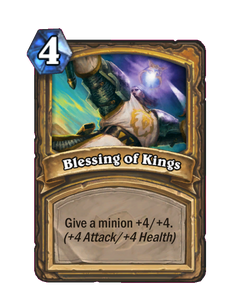 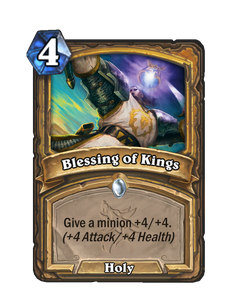 Regular and golden Blessing of Kings are uncraftable and cannot be crafted or disenchanted.

Two copies of regular Blessing of Kings are obtained for raising paladin to level 1.

Two copies of golden Blessing of Kings (Core) are obtained for winning 50 games as paladin.

Blessing of Kings (Core) is uncraftable and cannot be crafted or disenchanted.

Blessing of Kings is used to significantly boost the strength of a single minion. When cast on a small minion like the Silver Hand Recruit, a player can surprise an opponent with a sudden amount of threat. It is inadvisable to cast this spell on a newly summoned minion, as the opponent will have a fair chance of removing the enchanted minion before it is given an opportunity to attack.

This card is essentially Power Overwhelming, costing 3 mana more in exchange for having no drawbacks.

Blessing of Kings is a paladin ability from World of Warcraft. It is a long-duration buff that the paladin can grant to any friendly target, increasing their primary attribute by a small amount.