Hearthstone Wiki
Register
Don't have an account?
Sign In
Advertisement
in: Cards, Card data, All cards,
and 6 more 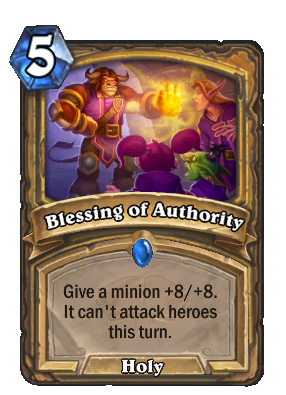 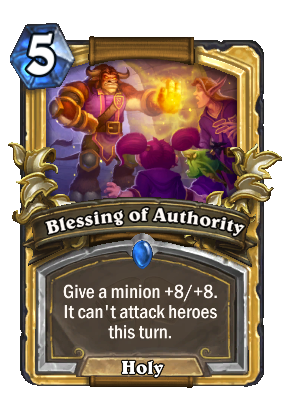 Give a minion +8/+8. It can't attack heroes this turn.
Flavor text

A paladin fights with honor! We don't go face... until next turn!

Blessing of Authority is a rare paladin spell card, from the Scholomance Academy set.

A powerful card that can be included in any Paladin deck that relies heavily on minion combat or seeks to buff their minions, like Pure Paladin or Libram Paladin. Compared to Blessing of Kings, it costs one more Mana for +4/+4, but trades this off with an inability to go face the turn you use it. However, a large buff for a relatively cheap price like this one, despite the lack of burst potential, still has major uses : it can be used very effectively for trading, specifically trading with big minions that can be inconvenient to remove ; it can be used more proactively, to put a huge threat in play along with other cards to protect it ; or, it can be used as a sort of protective option, to place a vulnerable minion out of range of removal.

If you intend to buff a minion that can attack the opponent's Hero, remember to use this card after attacking (unless you are attempting to play specifically around certain cards like Wandering Monster).