Edit
watch 02:52
Roblox: DeepWoken - The Loop
Do you like this video?
Play Sound
Bladestorm
Regular 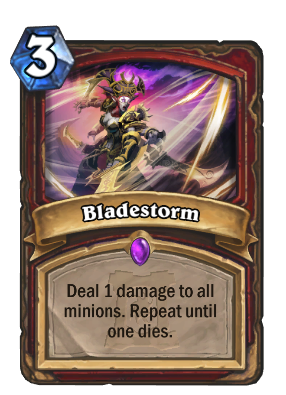 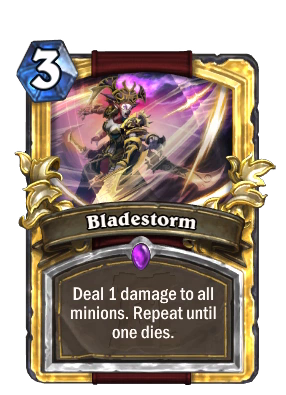 Deal 1 damage to all minions. Repeat until one dies.
Flavor text

Bladestorm is an epic warrior spell card, from the Ashes of Outland set.

Bladestorm is a reversed Defile where the effect continues until any minion dies. If activated once, Bladestorm performs exactly as a regular Whirlwind but costing two more mana than Whirlwind, and one more than Warpath or Bladestorm (Hero Power)

Bladestorm is best used when dealing with higher health minions which is able to proc its effect more than 3 mana such that it is efficient for its mana cost. It is not efficient to cast this when there are only 1 health minions on the board.

Bladestorm can remove a single minion on the board (up to 30 health) entirely as the only way to end its effect is having that minion to die. For example, a 8/8 minion with divine shield only on board will always die.

Bladestorm works alongside several cards such as Frothing Berserker (as long as Frothing Berzerker lives in the end) to gain massive amount of attack for every instance. Armorsmith to generate plenty of armor,

Bonechewer Vanguard and Bonechewer Brawler to gain massive amount of attack, Acolyte of Pain to draw 3 cards for free. or a single Grim Patron to summon 6 Grim Patrons on the board with 18/12 worth of stats for 8 mana, Blackhowl Gunspire to repetitively damage enemy face, Axe Flinger to deal up to 10 damage to the enemy hero, or any minions that gains bonuses whenever it takes a instance of damage.

Using Commanding Shout along Bladestorm ensures that only enemy minion deaths will end its effects but will leave your minions at most 1 health. You can use Battle Rage to generate a huge amount of card draw after Bladestorm

Bladestorm is a warrior ability (available as a regular ability for Arms and as an optional talent for Fury) which transforms the warrior into an "unstoppable storm of destructive force", causing them to deal significant Physical damage to all nearby enemies over 6 seconds while also temporarily making them immune to loss of control effects but also allowing them to still use defensive abilities and avoid enemy attacks. The ability first appeared as the Ultimate ability of the Blademaster hero unit in Warcraft III: Reign of Chaos.