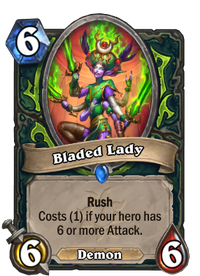 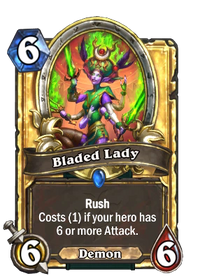 While you were busy learning magic, she studied the blade.

Bladed Lady is a rare demon hunter minion card, from the Madness at the Darkmoon Faire set.

This card works best on swing turns, letting you cheaply Rush into a minion and leave behind a decent threat, while also letting your hero attack a priority target (including the opponent's hero). It can also be played while already ahead on the board, securing a burst turn with an additional 6/6 for pressure.

Bladed Lady combos well with weapons, which let you preemptively increase your hero's attack. This can allow an on-curve Aldrachi Warblades to curve into Twin Slice and Bladed Lady on the following turn for a huge board swing. High-attack weapons like Marrowslicer are particularly useful for this.

Soulshard Lapidary is excellent with this card, activating Bladed Lady's effect by combining it with Demon Claws.