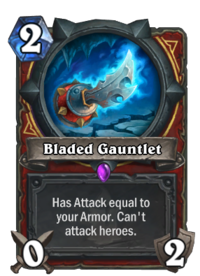 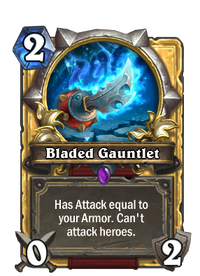 Has Attack equal to your Armor. Can't attack heroes.

CAUTION: DO NOT SCRATCH NOSE.

Bladed Gauntlet is an epic warrior weapon card, from the Kobolds and Catacombs set.

Bladed Gauntlet can be obtained through Kobolds & Catacombs card packs, or through crafting.

Bladed Gauntlet can become very powerful in decks with plenty of Armor gain, especially in decks that run Genn Greymane or Justicar Trueheart. Despite its potential to one-shot everything, it requires investment in Armor to build up its damage so it's difficult to utilize early game despite its low cost and less reliable than higher cost control weapons like Gorehowl or Supercollider.

The player can also use Bloodsail Raider's or Phantom Freebooter's Battlecry to gain its stats. Given enough armor, these minions can become extremely deadly, making them a must-remove to your opponents.

Mayor Noggenfogger can potentially redirect your attack to the enemy hero, which can result in massive lethal damage with enough armor.

Bladed Gauntlet is unique to Hearthstone. However, it bears a striking visual similarity to the namesake weapon of Kargath Bladefist, chieftain of the orcish Shattered Hand clan, who cut off one and later both of his hands and attached blades to his severed limbs, which inspired his followers to do the same and gave the Shattered Hand clan its name.