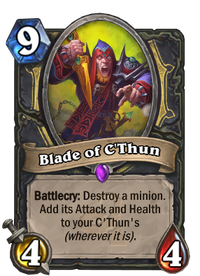 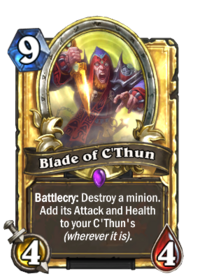 Battlecry: Destroy a minion. Add its Attack and Health to C'Thun's (wherever it is).

Blade of C'Thun is an epic rogue minion card, from the Whispers of the Old Gods set.

Blade of C'Thun can be obtained through Whispers of the Old Gods card packs, or through crafting.

A great combination with Shadowstep after using this card, thus returning it to your hand with a reduced cost of 7 mana. Then, next turn it can form a combo with Brann Bronzebeard, who costs 3 mana, for the total of 10 mana. Shadowcaster is also very useful if you can keep Blade of C'Thun alive to the next turn, effectively creating a 1-mana Assassinate with further boost to your C'Thun. Ultimately, this card can create a very strong C'Thun without the need of other C'Thun-buffing minions in your deck.

This minion's title and robes suggest he holds an elevated position within the ranks of one of C'Thun's cults, perhaps as a high priest, or assassin - or both.