This article is using {{Card template}}.
See Help:Style guide/Card for how to edit this kind of article.
Edit this article
Blade Flurry
1064 • CS2_233
Regular 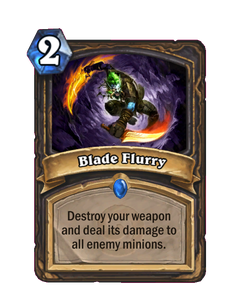 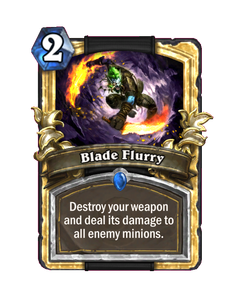 "Look, it's not just about waving daggers around really fast. It's a lot more complicated than that." - Shan, Rogue Trainer 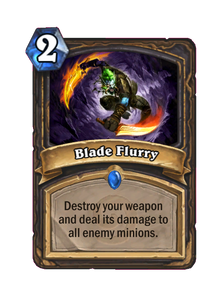 Blade Flurry is a rare rogue spell card, inducted into the Legacy set, formerly from the Classic set. 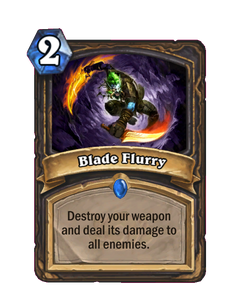 Blade Flurry is an area of effect attack with variable output depending on the rogue's current weapon. The high cost of the spell and the destruction of the equipped weapon mean it is often an inefficient play without the right conditions.

Because this spell destroys the weapon, if the weapon has more than 1 Durability remaining, the rogue should almost always attack first, before using Blade Flurry. With Deadly Poison on a Wicked Knife, this allows the rogue to deal 6 damage to a single minion, and 3 to all other enemy minions.

Blade Flurry synergizes extremely well with Kingsbane, as it is reusable weapon thanks to its Deathrattle and its Attack carries over, making the combo one of the most powerful Flamestrike-like minion clear card Rogue can offer, even though it does not activate poisonous and lifesteal. Its snowball damage becomes more powerful over the course of the game as more buffs are played on Kingsbane, which can be amplified by using Shadow Reflection with cards such as Deadly Poison.

Blade Flurry is a Combat rogue ability, learned at level 10. While active, all of the rogue's attacks strike up to 4 additional nearby enemies within 8 yards for 35% damage, but the rogue's energy regenerates 20% more slowly. Blade Flurry is one of the few area of effect abilities available to rogues (the others being Fan of Knives and Killing Spree).

This effect has no fixed duration but can be toggled on and off. After being cancelled, it goes into a 10 second cooldown (similar to Stealth).

Comments: "Blade Flurry is a problem because it enables both board clear and heavy burst damage, and it’s also an obstacle to adding better cards for Rogues. To address these issues, the cost of Blade Flurry is moving from 2 to 4 mana, and it will now only affect minions, so that Rogues have to choose between removing threats or damaging the enemy Hero."