This article is using {{Card template}}.
See Help:Style guide/Card for how to edit this kind of article.
Edit this article
Blackwing Technician
2408 • BRM_033
Regular 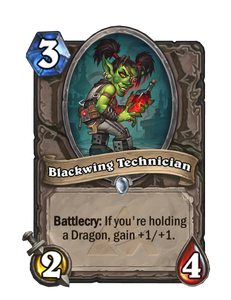 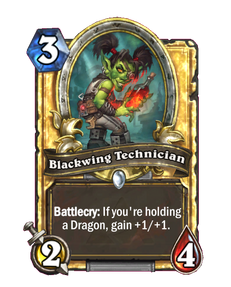 This is who you go to when your Blackwing needs a tune up. Don't go to a cut rate Blackwing tune up shop! 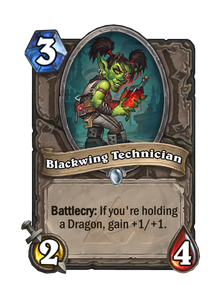 Blackwing Technician is a common neutral minion card, from the Blackrock Mountain set.

While a measly 2/4 by default, with a Dragon in hand this minion becomes a 3/5 for 3 mana, a strong basic minion for the cost. However, the requirement makes it a poor pick unless your deck has a strong Dragon theme. The +1/+1 buff provided by this minion's Battlecry also makes it susceptible to Silences. Note that the successful activation of the Technician's effect will signal to the opponent that the player has a Dragon in their hand, although which Dragon or Dragons will not be revealed.

Summon
My work is paramount, leave me alone!

If you think shredders are the only things goblins like to tinker with, you are sadly mistaken. The green-skinned technicians within Blackwing Lair love to tinker with “organic chemistry,” creating volatile concoctions from dragon experiments that enhance their own nefarious powers. If you see a Blackwing Technician looking shady, be sure to take note: A dragon is near.[1]

Blackwing Technicians can be found in the Crimson Laboratories of Blackwing Lair after defeating Broodlord Lashlayer. These goblins are the only known source of the rare Elementium Ingot.

Ben Brode and Mike Donais have stated that Team 5 considered 10 different versions of Blackwing Technician before reaching the current design, including the following:[2]

Part of the original design for Blackwing Technician was to have a card which provided synergy with both the Mech and Dragon types.[2] This would serve to carry on the Mech theme from Goblins vs Gnomes, and also fit with the Technician's lore.[2] One early iteration saw the Technician gaining +2/+2 each time the player drew a Mech or Dragon card.[2] However, both the ability and the dual-synergy theme were eventually discarded, being considered both too powerful and too confusing in building a fitting deck.[2] Brode remarks that this also better fit the ideal narrow focus of the adventure, with support for multiple deck types better suited to a full expansion.[2]

A variety of designs were then tried to evoke the right synergies with the Dragon type. With an emphasis on encouraging players to include high cost Dragons in their decks, one design saw the Technician as a druid card, with its Battlecry grant the player Armor equal to the cost of a random Dragon in their hand.[2] However, both the lore and the Armor-generating mechanic involved ultimately felt too incongruous with the class.[2]