This article is using {{Card template}}.
See Help:Style guide/Card for how to edit this kind of article.
Edit this article
Blackwing Corruptor
2409 • BRM_034
Regular 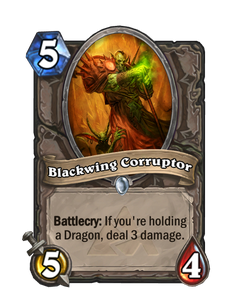 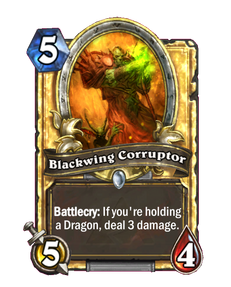 He got his name when he gave Blackwing some comic books and rock & roll records. 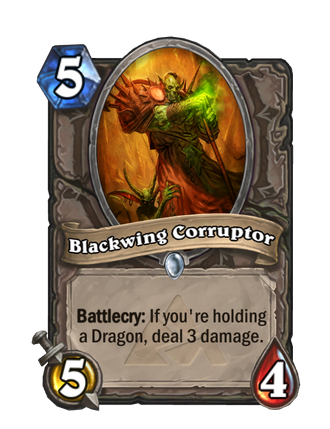 Blackwing Corruptor is a common neutral minion card, from the Blackrock Mountain set.

With a potent Battlecry, the Blackwing Corruptor makes for a good mid-to-late game minion. The 3 damage on play can be used to remove or soften up enemy minions, but its stat distribution makes it vulnerable to your opponent's 4-damage options. This card could be compared to

Nightblade, except for having +1 Attack and its Battlecry being targetable.

While the Technicians are busy dabbling with their dangerous dragon experiments, the Blackwing Corruptors are engrossed in harnessing and controlling the powers of dragons for their own dark deeds. These minions have seen “How to Train Your Dragonkin” at least 100 times. Their powers are also bolstered by their proximity to dragons, so stay on your toes![1]