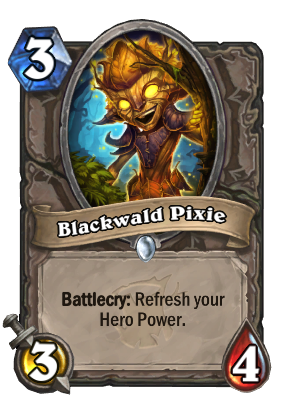 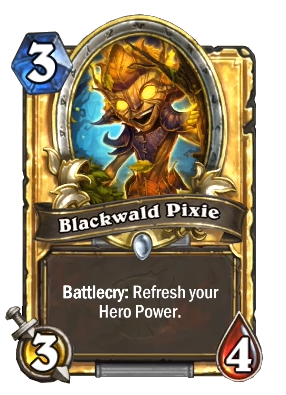 Blackwald Pixie is a common neutral minion card, from the The Witchwood set.

Blackwald Pixie can be obtained through The Witchwood card packs, or through crafting.

Blackwald Pixie works well in decks which depend on a powerful Hero Power, such as those running Hero cards with usable Hero Powers or Baku the Mooneater.

Note that despite having the stats of an early game minion, you must have at least 7 Mana in order to play Blackwald Pixie and make use of your Hero Power twice, without any cost-modifying effects. As such, the effect will likely come into play only in mid- to late game, but the stats make Blackwald Pixie still decent to play for tempo if drawn early.

For some classes, Blackwald Pixie can be used early in the game should the player is playing as a Demon Hunter to make use of a 1 cost hero power or a Hunter running the Defending the Dwarven District questline to have it's hero power cost 0. This becomes better as it is a odd cost card which empowers their hero power thanks to Baku, the Mooneater

The Blackwald is a forest in southern Gilneas, located south of Gilneas City and north of the village of Stormglen. The Blackwald was the home of the Druids of the Scythe, who eventually became the first worgen. Tal'doren - a tree identical to the one where the original worgen were imprisoned in the Emerald Dream - is in the forest's center. The Blackwald is full of Howling Banshees, Sylvanas' scouts looking for Tal'doren.

Much like how the rest of the Blackwald was transformed into the Witchwood by Hagatha the Witch, Blackwald Pixie "was turned dark and spooky" by Hagatha.[1]

Sprites are small, mischievous nature spirits found in Pandaria, on the Wandering Isle, and in Val'sharah.

Mischievous and prevalent, the nature sprites of Pandaria resemble the prevalent features of their surroundings, like shrubs or rocks. Their appearance allows them to easily hide and engage in their favorite pastime – playing tricks on others for inscrutable reasons. Many forest sprites' pranks – disguising themselves as stools to trip people, or throwing fruit and nuts at wanderers – seem harmless. Mountain spirits' means of interaction tend to have a higher incidence of violence and death, involving rockslides and falls off cliffs.

Rumor has it that more deadly, unique varieties of sprites have emerged in sha-tainted areas. If sprites' behavior is simply a reflection of the environments that surround them, any such creatures must be monumentally dangerous.

Plant-like sprites are really just living plants and will resprout later if killed. The needles of the needle sprites that dwell in Kun-Lai Summit can be used in a special acupuncture technique to purge poison.

Sprites shroud themselves in illusion to avoid detection. It is a little-known secret that the dust sprites use for their various tricks have restorative properties.

Sprites are not previously known to live in Gilneas, but concept art for World of Warcraft: Cataclysm depicts a Gilnean creature known as a "thorn sprite".