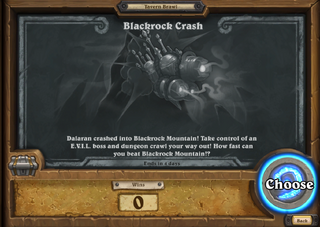 This Brawl celebrates the Fire Fest-E.V.I.L. event, and is played exclusively on the Blackrock Mountain battlefield.

This single-player Brawl sees players navigating through Blackrock Mountain as one of four playable heroes: Hagatha, Dr. Boom, Madame Lazul and King Togwaggle. In the second week, a fifth hero is added, Rafaam.

It is similar to the Dungeon Run mode, and the encounters mirror those from the Blackrock Mountain adventure, with the exception of

Note: Because this is a Tavern Brawl, games played in this mode do count towards completing daily quests, even though the games are not played against other humans.

Upon starting a fresh run, a player is given a deck of 10 cards. These decks are always the same for that class. Each deck runs one copy of each of the cards in the below lists.

The first time a player enters the Brawl,

Rafaam: How did we crash into A MOUNTAIN!? Seriously?
Boom: Hey! Runnin' into a mountain isn't an art, it's a SCIENCE!