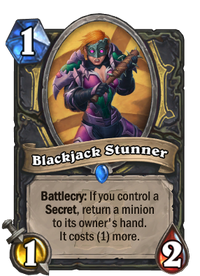 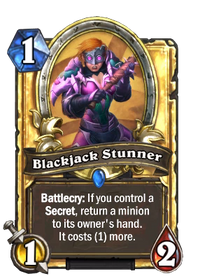 Battlecry: If you control a Secret, return a minion to its owner's hand. It costs (1) more.

"I'm about to ruin this 10-cost minion's whole career."

Blackjack Stunner is a rare rogue minion card, from the Ashes of Outland set.

Blackjack Stunner is a powerful disruption tool used in Secret Rogue decks, with an effect similar to Hunter's Freezing Trap. While Freezing Trap works immediately during the opponent's turn, Blackjack Stunner requires you to have a pre-existing Secret in order to trigger, but can control which minion gets returned. Not only can it work as a discounted Sap, but it can also disrupt the opponent's tempo with an increased mana cost for the returned card. Blackjack Stunner can also return friendly minions as well, allowing you to reuse minions with Battlecry or Combo, though Rogues have better alternatives to use for their own minions.

Blackjack was a former Rogue talent that made the target of Sap deal reduced damage after the effect wore off.