Edit
watch 02:52
Roblox: DeepWoken - The Loop
Do you like this video?
Play Sound
Blackguard
Regular 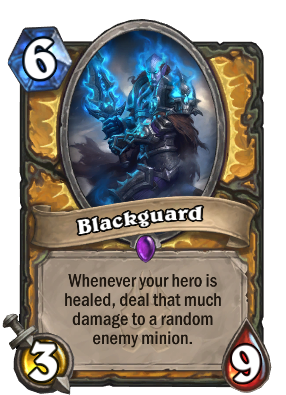 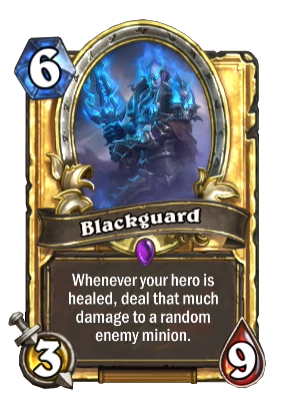 Whenever your hero is healed, deal that much damage to a random enemy minion.
Flavor text

"Did I ever tell you the story of when I single-handedly took down a 29/29 C'thun?" - Reno Jackson

Blackguard is an epic paladin minion card, from the Knights of the Frozen Throne set.

Blackguard can be obtained through Knights of the Frozen Throne card packs, or through crafting.

Blackguard synergizes well with cards that heal your hero such as Ivory Knight, Truesilver Champion or Lifesteal minions. Cards with Lifesteal such as Chillblade Champion can help keep the opponent's board predictably under control.

Blackguard has a strong synergy with Truesilver Champion. The heal is applied before the attack, so, whenever you attack an enemy with 2 health (or 4 with a Crystalsmith Kangor) the heal trigger will activate his effect and the damage applied will kill the target without expending the weapon's durability. This combination allows you to get a huge control over the enemie's field, and when paired with The Glass Knight, you can totally dominate the filed easily as long as your hero have suffered damage. It is obvious that this combo should be used with High Priest Thekal and Bloodclaw.

As mentioned before, a Blackguard with Life Steal becomes an endless cycle killing machine as long as you health is not full or the enemy does not have minions.

When combined with Nozari or Forbidden Healing, Blackguard gives an insta-kill effect.

Though its 3 Attack is low for its Mana Cost, its 9 Health is more than average to survive multiple enemy attacks or AoE damage.

The Blackguard is a fallen paladin who is now a death knight.[3]