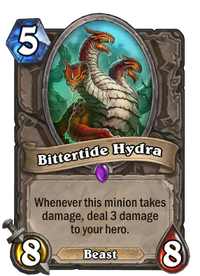 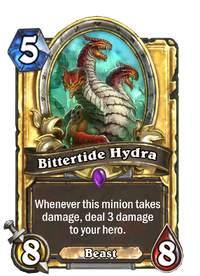 Whenever this minion takes damage, deal 3 damage to your hero.
Flavor text

It's actually only the middle head that's bitter. The others are sweet and spicy.

Bittertide Hydra is an epic neutral minion card, from the Journey to Un'Goro set.

Bittertide Hydra can be obtained through Journey to Un'Goro card packs, or through crafting.

This card is similar to Fel Reaver before it - a 5-mana 8/8 with a huge drawback that's best used as a finisher for aggro decks - but with a different weakness: dealing damage to your hero whenever it takes damage. On the surface, it may seem better than Fel Reaver's discard effect, but its weakness can be just as bad, if not worse, if played at the wrong time.

Compared to Fel Reaver, its drawback is not even a factor if the opponent is forced to answer it with a hard removal since they do not deal damage, and if countered with another large or poisonous minion, it will not result in a huge loss of health. The scenarios where Bitterhide Hydra's effect becomes a significant problem is if the opponent's board has many small minions or has ways to deal small amounts of damage to it multiple times, such as Arcane Missiles, Unleash the Hounds, Volcano, and C'Thun's Battlecry. It also becomes problematic if the opponent is able to have multiple small Taunt minions to block it. Each time the Hydra has to attack a Taunt in the way, it will add up more damage to your hero over time.

In Arena, this card can be good, but it may also backfire. Minion value is important in Arena; this makes the 8-8 stats for 5 mana look attractive. When played under the right circumstances, this card can win the game almost single-handed. However, Arena games aim for board control and having as many minions as possible, so it is possible that the Bittertide Hydra will be opposed by multiple minions; if they all attack into it your hero suffers a lot of damage. Even if you hold back on playing it until there are no small minions on the opponents side, the Hydra may still be damaged multiple times since damage-dealing Battlecries like Fire Plume Phoenix and low-damage AoE like Volcanic Potion and Primordial Drake are also common picks in Arena. Because of these risks, the Bittertide Hydra becomes a dead card in your hand once your hero is low on health.

Bittertide Hydras are hydra mobs found in and around Bittertide Lake in Sholazar Basin, a region of the continent of Northrend very similar to Un'Goro Crater.