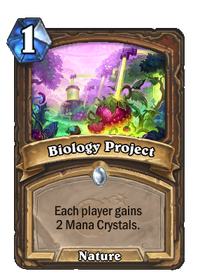 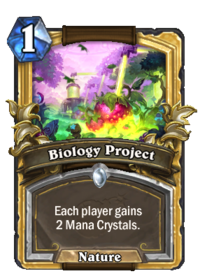 Biology Project is a common druid spell card, from The Boomsday Project set.

Biology Project can be obtained through The Boomsday Project card packs, or through crafting.

Biology Project is a powerful card for Druid decks that want to ramp up their Mana count as fast as possible. Even though the effect applies to both players, if their deck is designed to have many high-cost cards that are more likely to be useless early, this card accelerates the game so you can play your expensive cards sooner, causing aggro and some midrange decks fail to catch up since those decks are designed to play inexpensive cards early on before the opponent can play stronger cards that can counter them.

Since this card returns 2 Mana Crystal for 1 Mana, it can be used in the same way as Innervate to gain an extra mana on the turn you play it.