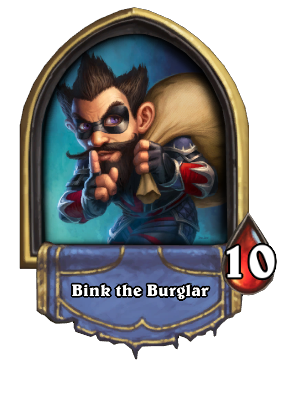 Being one of the first bosses, Bink is generally very easy. His hero power does not directly impact the board like the other two first round bosses, however it is important to note that since he steals cards from the player's class, it is not impossible for him to cheat out a win.

Bink the Burglar
Your pockets are lookin' awful heavy there, bud!

Bink the Burglar
This place. It's like a maze of twisty little passages. All alike!

Bink the Burglar
It's a game of give and take. And I do the taking!

Bink the Burglar is unique to hearthstone. In World of Warcraft, gnome thieves would be members of the Hidden Circle, a group of rogues who collect valuable gems through illegal means while being investigated by the government.

His emote response "It's like a maze of twisty little passages, all alike." is a reference to the text adventure game Colossal Cave Adventure from 1976.