This article is using {{Card template}}.
See Help:Style guide/Card for how to edit this kind of article.
Edit this article
Big Game Hunter
1657 • EX1_005
Regular 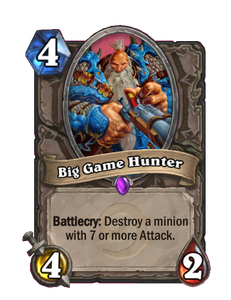 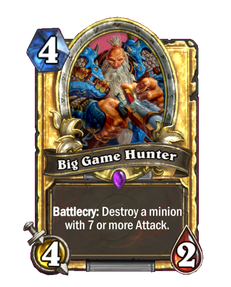 Mere devilsaurs no longer excite him. Soon he'll be trying to catch Onyxia with only a dull Krol Blade. 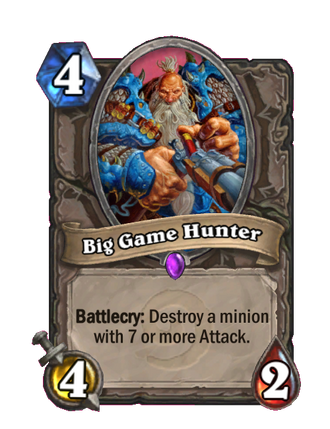 Big Game Hunter is an epic neutral minion card, inducted into the Legacy set, formerly from the Classic set. 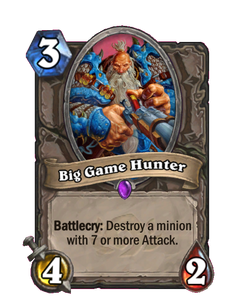 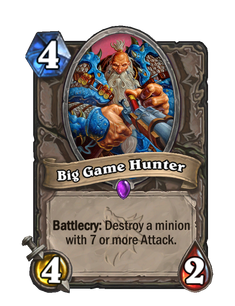 Big Game Hunter are obtained for raising sum of all your class levels to 31.

Two copies of golden Big Game Hunter (Core) are obtained for winning 2500 games across all classes.

Big Game Hunter (Core) is uncraftable and cannot be crafted or disenchanted.

Big Game Hunter is a unique card in its ability to destroy an opposing large minion while simultaneously generating a useful minion. Big Game Hunter can remove the biggest threats in the game, from giants and legendary Dragons to Old Gods. All this happens while a 4/2 is being played onto the board, which is usually sacrificing five stat points (about 2-3 mana) to kill a large threat.

The decks that get the most advantage out of Big Game Hunter are generally control decks. Don't use this in aggressive decks - if you actually need Big Game Hunter, you're probably losing already.

You should consider heavily whether you want to use Big Game Hunter instead of a class's normal removal. For example, Rogues and Warlocks can use

Siphon Soul, respectively, to destroy any minion regardless of its Attack, but without the minion generation. On the other hand, Warriors may prefer to use

Execute because it costs less mana and works against almost all (damaged) minions. The same can be said for Hunters and Paladins with

Hex, respectively, and the transformation is often valuable in bypassing Deathrattles. Priests are actually an unlikely user of Big Game Hunter even though they are a complete control class.

Shadow Word: Death beats Big Game Hunter because it can target 5 and 6 Attack minions, and

Entomb can bypass Deathrattles while adding a new card to your deck.

Druids should therefore be the first ones to seriously consider using Big Game Hunter in their control decks. Druids lack good single-target removal of any kind, and even a 7-Attack limitation is still very well usable to kill minions.

It should be noted that many normal late-game "finisher" cards are not 7 Attack or above, meaning that Big Game Hunter is useless against them. This includes but isn't limited to

Ancient of War (+5 Health and Taunt is almost always chosen),

Additionally, this card's unique Battlecry can be used with other cards or minions that increase an enemy minion's Attack. For example, the player can play

Dark Iron Dwarf and grant an enemy minion +2 Attack, allowing the Big Game Hunter to destroy the buffed minion. However, it is not worth including cards such as

Abusive Sergeant in a deck for the express purpose of this interaction.

This card refers to a series of quests from World of Warcraft, where the player is tasked by

Hemet Nesingwary with hunting down rare or elusive animals. Since then, this neutral faction of beast hunters has made its way to the new lands unveiled with each expansion in order to hunt the dangerous beasts found there, while offering quests to players to do the same.

In the classic game, there were quests in Stranglethorn to hunt dangerous wild beasts for sport. They eventually chained to an elite boss tiger, that was difficult to solo at the time. In The Burning Crusade, a camp was introduced in Nagrand with new beast hunting quests; Wrath of the Lich King saw a new camp in Sholazar Basin; and Mists of Pandaria saw mighty beasts hunted in Valley of the Four Winds. Warlords of Draenor saw the Alliance and Horde inviting Nesingwary to the alternate universe Nagrand, however when they revealed his invitation was not to hunt wild game but rather the wolves of the Warsong clan, he refused, and consequently did not offer any quests. In World of Warcraft's latest expansion, Legion, Nesingwary is back again, stationed in Nesingwary's Retreat, again hunting the big game of Highmountain, and providing quests for players to do the same.

Commentary: "Big Game Hunter represents an inexpensive source of removal that is packaged with a minion. It’s efficient enough that some Heroes with powerful Class-based removal cards choose to run the neutral Big Game Hunter. We’re increasing the cost of the card from 3 mana to 5 mana."