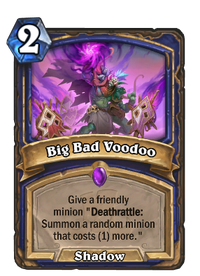 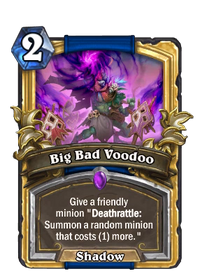 Give a friendly minion "Deathrattle: Summon a random minion that costs (1) more."

Big Bad Voodoo can be obtained through Rastakhan's Rumble card packs, or through crafting.

While Big Bad Voodoo is not available to players in World of Warcraft, it is used by a handful of troll characters throughout WoW (notably including Vol'jin). Generally, it functions similarly to the Warcraft III version by granting immunity to nearby friendly targets, sometimes with other, additional benefits as well.