This article is using {{Card template}}.
See Help:Style guide/Card for how to edit this kind of article.
Edit this article
Big-Time Racketeer
40494 • CFM_648
Regular 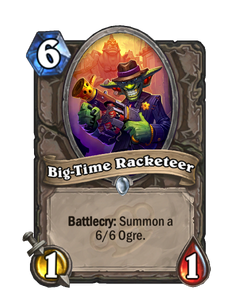 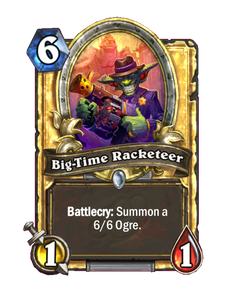 "It'd be a shame if someone disenchanted those Legendaries." 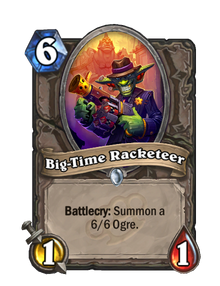 Big-Time Racketeer is a common neutral minion card, from the Mean Streets of Gadgetzan set. 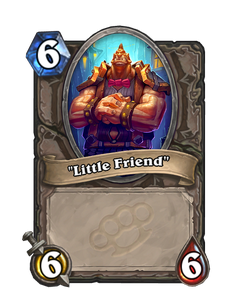 For 6 mana, this card provides a straight forward 7/7 in total stats, split between the two minions, if it is able to activate its Battlecry. Also makes for a powerful combination with Brann Bronzebeard, as well as being a good target for cards that buff minions in your hand, allowing you to put out multiple large bodies at once.

It also works very well with transformation effects, turning the near-useless 1/1 into something much more useful. Evolve gets two 7-mana minions out of them, but single-target transformation effects like Master of Evolution, Transmute Spirit, Polymorph: Boar, and Recombobulator allows you to keep the solid 6/6 body.

While a terrible result for cards like Moonglade Portal, this is a powerful minion in its abilities to render Secrets such as Snipe, Potion of Polymorph, and Sacred Trial near-useless.