Hearthstone Wiki
Register
Don't have an account?
Sign In
Advertisement
in: Credits cards, Credits card data, All cards,
and 3 more 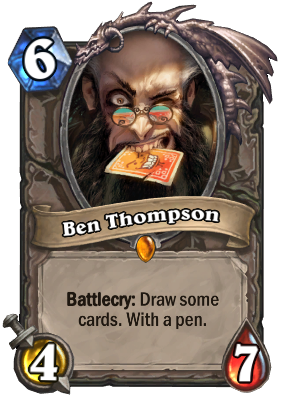 Elite
Battlecry: Draw some cards. With a pen.
External links

Ben Thompson is a Blizzard employee who formerly worked as a Lead Artist for Hearthstone, featured in the credits card of the same name. He is also the artist for the cards listed here.

In November 2019, two weeks after BlizzCon, Thompson made a quiet exit and left Blizzard to pursue other things.[1]

As Blizzard Entertainment's lead artist for Hearthstone™: Heroes of Warcraft™, Ben Thompson is responsible for developing and maintaining the style of the game throughout production. This began with creating a focused style guide on which to build the game as a whole and now includes the painting and polishing of the textures, FX, and models based on those concepts, as well as directorial review of their implementation to assure a high level of quality.

Before Thompson joined Blizzard Entertainment in 2009, he accrued extensive experience in the card-gaming realm, serving as art director for the World of Warcraft trading card game and contributing over 70 illustrations across 20 sets of Magic: The Gathering. Prior to moving into game development, Thompson taught up-and-coming artists for six years as an associate professor of art and illustration at CSU Long Beach and Mt. San Antonio Community College.

While best known for his fantasy artwork, Thompson is also an avid WWI and WWII collector and enthusiast, with much of his private work focused on military history.[2]

Thompson was the first artist to be brought onto Team 5, later becoming Lead Artist when other artists joined the group.[3] As the only artist on the team during the game's initial development, it fell to Thompson to define the artistic style, look and feel for the game.[3][4] Thompson also had to develop all art for the initial game except the card art itself, including all battlefields, card backs, the Hearthstone box and all interface elements.[4] Creating these assets defined the emerging feel of what would go on to become Hearthstone.[4]

Thompson used his training as a traditional painter to produce the game's style, a primarily 2D form reminiscent of early Blizzard art for games such as the original Warcraft and Diablo.[3] As a strictly 2D artist, Thompson turned his lack of capability in 3D image manipulation into a strength by focusing on creating an earlier style of art that would "celebrate the feel that I know and loved and ... wanted to bring back into a video game setting".[3] Thompson was also central to the work to create a digital card game that still evoked the feelings of a physical card game, while expanding from the extremely 2D imitations of such games into the additional capabilities of a purely digital experience.[3]

Thompson was not initially convinced that the game should retain the focus on actual cards, considering that the digital medium gave them the opportunity to move beyond cards and explore other forms of collectible.[3] The designers experimented with many visual styles for Hearthstone, including "voodoo dolls, gear-driven contraptions, magical jars, moonwells and even papercraft minions."[5]

However, as Thompson and the team experimented with various forms and styles, eventually they realised that by abandoning cards they were throwing away a powerful foundation for the game, the "common language" of familiarity with cards; instead of instinctively understanding their use, form and value, players would have to be educated about the game's collectibles, making matters unnecessarily complex.[3] The designers eventually found a more traditional card-based visual design "hard to beat" due to its simplicity and players' familiarity with this design.[5]

As a result, Thompson and the team decided to return to the card as the basic form for the game's collectibles, but to do it their own way, combining the familiar strengths of the traditional card design with the exciting new possibilities of the digital realm.[3] For example, minions cards were designed to evoke the basic feeling of collecting and holding a card in the player's hand, but once played to transform into a less traditional and more dynamic form of collectible, moving of its own accord, crashing into other minions, and crumbling into pieces when destroyed.[3]

Once the developers had settled on a look and style for the game, additional personnel were brought onto the art team in the form of 3D modeller John Zwicker and technical artists Becca Abel and Kyle Harrison, with Thompson taking on the role of Lead Artist. Jomaro Kindred would later join to share the 2D artist workload with Thompson.[4] 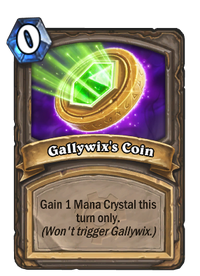 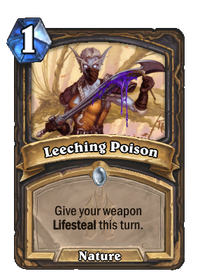 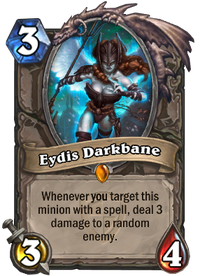 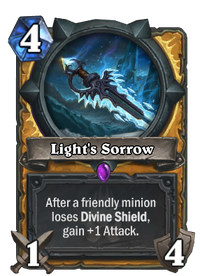 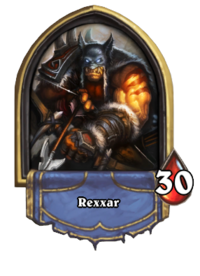 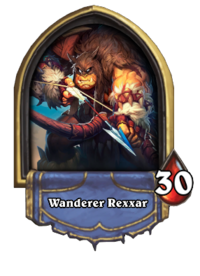 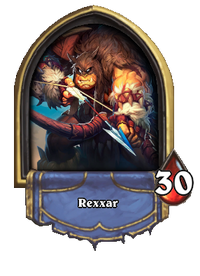 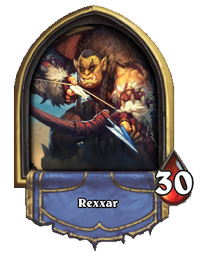 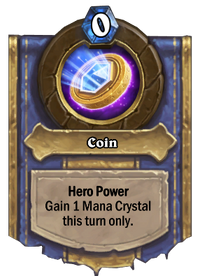 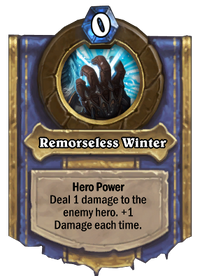 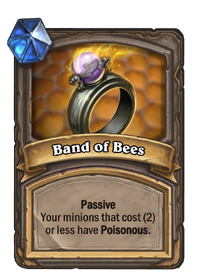 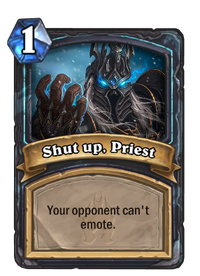 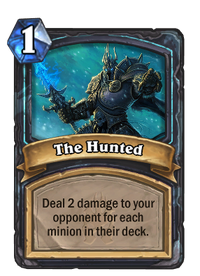 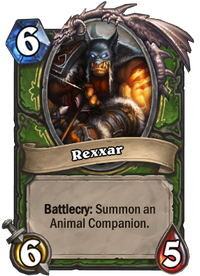 The following cards are seen only in Tavern Brawls. 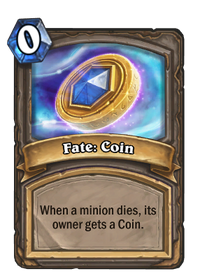 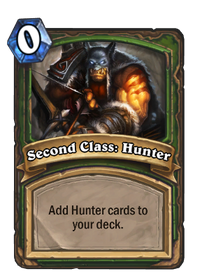 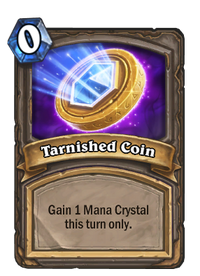 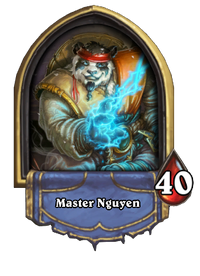 The following cards are seen only in Duels. 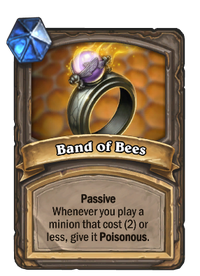 The art for Thompson's credits card was created by .