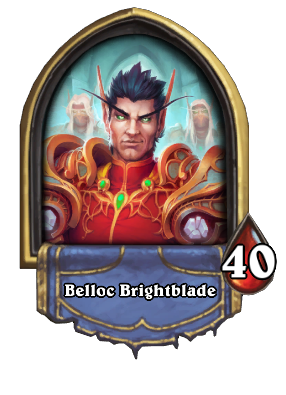 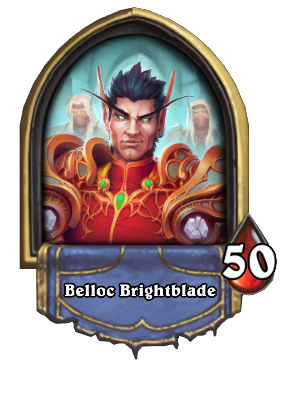 This smarmy leader of the Reliquary is a thief of the highest order.

Belloc Brightblade is a boss that can be encountered initially in Chapter 4 of Tombs of Terror. After completing Chapter 4, this boss encounter will be available in any completed chapter.

Belloc Brightblade forces the player to play without spells or significantly restrict their use. While it does not seem difficult in normal difficulty, on heroic mode Belloc's quick takeover of the board often forces to cast anything, which also puts to Belloc's hand.

In Normal difficulty Belloc is not a very strong midrange paladin, with the support of several Warlock cards. His Lynessa Sunsorrow usually gets 1-2 Seal of Champions (all AI heroes do not cast Pharaoh's Blessing for some reason). In general, it is not difficult to clear his board and Belloc is countered by standard proper actions of player and usual passives like First Aid Kit, Glyph of Warding, Rocket Backpacks which are very useful for heroic mode too.

In Heroic mode Belloc almost does not have the minions that can be eliminated without further consequences due to large amount of Divine Shields and good mana curve. In so situation it becomes very difficult to play without magic, and if it is impossible to kill at least one minion every turn with weapon or the hero power, the player will have to give Belloc your spells. If is is Map of Uldum, Zephrys's Lamp or Sack of Lamps, give these treasures at the very beginning of the game - Belloc will get only one card and mana crystal in first case or will immediately spend all the Lamps, getting a very small value with 2-mana minions/spells compared to the later stage of the game. If the player's deck has a lot of huge minions, reducing the power of Belloc's hero power is possible with Crook and Flail. Aggro decks can get the opportunity to seize the initiative using Disks of Swiftness. In addition, the entire battle becomes much easier with Anomaly - Whirling Winds.

Belloc Brightblade
You are standing in my way, Explorer.
You won't be swiping anything this time, Reno. (vs. Reno Jackson)
They've sent a murloc? To the desert? Priceless! (vs. Sir Finley)
Have you reconsidered my offer to join the Reliquary, Elise? (vs. Elise Starseeker)
You're two steps behind, Brann. As usual. (vs. Brann Bronzebeard)

Belloc Brightblade
I am not going to grandstand about MY plan.

Belloc Brightblade
I am not sure if we have one of these... Thank you.
I have one of those too.
This one will be of great use to us.
You have never seen a collection like mine...

Oh, thank you for letting me have this!
What a marvelous gift to just leave lying around!

Belloc Brightblade
My white suit? Oh. Dry cleaning.
Rafaam doesn't know what he's missing here in Uldum.
The plagues merely serve as a distraction for what I seek.
We are but a shadowy reflection of your League...

I admire this one's commitment.

Your assistance is welcome, Knight.

I expect no less of your so called "League".

You're using the plagues as well? I thought you were the "heroes".

Belloc Brightblade
Your treasures, please? Once again what was briefly yours is now mine.

Belloc Brightblade is a blood elf archaeologist and a member of the Reliquary. He is located in Orgrimmar as an Archaeology trainer and a part of delegation from Silvermoon City.