Edit
watch 02:52
Roblox: DeepWoken - The Loop
Do you like this video?
Play Sound
Belligerent Gnome
Regular 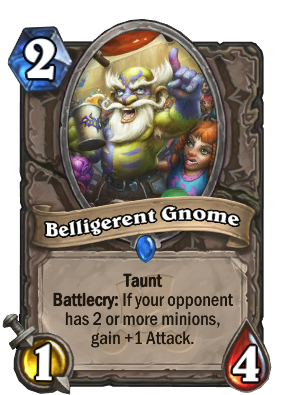 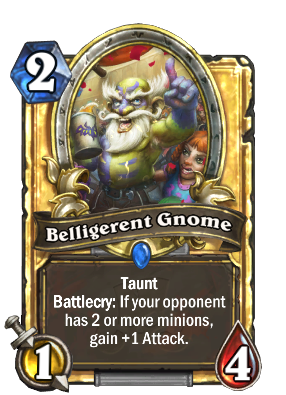 Taunt
Battlecry: If your opponent has 2 or more minions, gain +1 Attack.
Flavor text

Maybe don't put this one in your garden.

Belligerent Gnome is a rare neutral minion card, from the Rastakhan's Rumble set.

Belligerent Gnome can be obtained through Rastakhan's Rumble card packs, or through crafting.

While already a decent cheap taunt minion at 2 mana for 4 Health, Belligerent Gnome is best played if your opponent has more than 1 minion, becoming a 2/4 Taunt for only 2 mana.

This gnome is evidently a big fan of Jan'alai Dragonhawks, to the point of painting the team's logo on his chest and face and his cup having the Dragonhawks logo.