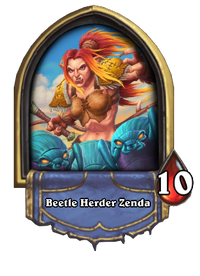 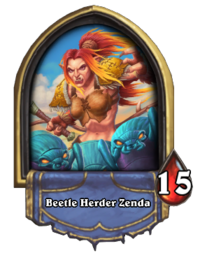 Beetle stampedes are terrifying. It's the rumble of those teeny-tiny feet.

Beetle Herder Zenda is a boss that can be encountered initially in Chapter 2 of Tombs of Terror. After completing Chapter 2, this boss encounter will be available in any completed chapter.

This is one of the few early fights that can stretch out even if you not intested to play until fatigue. Zenda summons the Plated Beetle quite often and accordingly gets a large amount of armor. In addition, Infested Goblin is actively used for protection. Other cards do not have a significant impact on the game situation. On Normal you can safely go to the face, making only profitable trades, but on Heroic it's desirable to kill any minions, since they can be buffed with Mark of the Lotus and Mark of Y'Shaarj (the exception is lethal on the next turn or Addarah in the hand).

Beetle Herder Zenda
My beetles ain't a fan of trespassers! I ain't either!
Scarabs ain't for ridin', murloc! Get off! (vs. Sir Finley)
Stick to tamin' dinosaurs, dwarf! (vs. Brann Bronzebeard)

Beetle Herder Zenda
The beetles be speakin' to me. Quiet!

A good herda's gotta have some muscle on dere side!

I honor de fallen... by wearing them as armor!