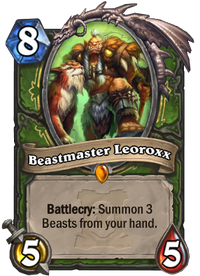 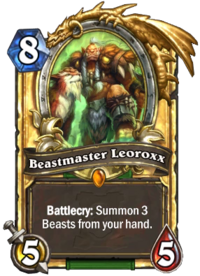 Battlecry: Summon 3 Beasts from your hand.

For the boss in Book of Heroes, see Leoroxx.

Beastmaster Leoroxx is a legendary hunter minion card, from the Ashes of Outland set.

Beastmaster Leoroxx can be obtained through Ashes of Outland card packs, through crafting, or as an Arena reward.

Beastmaster Leoroxx can cheat 3 beasts from your hand. To effectively use its Battlecry, use beasts with powerful stats or effects. King Krush, Savannah Highmane, and Charged Devilsaur are great targets to be cheated out. Using Tundra Rhino can provide tremendous damage alongside your two other beasts as they gain Charge.

You can set up Leoroxx using Helboar, Scavenger's Ingenuity, and Scrap Shot to buff a Beast in your hand, then use Ramkahen Wildtamer or Hunting Party to double and triple it. This is particularly good with any Beasts with Charge. Just be sure to empty other Beasts from your hand, so you don't waste buffs on them or pull them with Leoroxx instead of your combo cards by accident.

Leoroxx is the leader of the mok'nathal, a clan of ogre-orc hybrids dwelling in Blade's Edge Mountains, and the father of Rexxar, Champion of the Horde. The mok'nathal are very pacifistic, but Rexxar — against the wishes of his father — joined the Horde believing that there was nothing left for him among his people. For his actions, Leoroxx disowned him, and for thirty years his mind has remained stubbornly set against his son, even after Rexxar returned to Draenor — now Outland — to search for what remained of his people. Leoroxx has a companion lynx named Tethik.