This article is using {{Card template}}.
See Help:Style guide/Card for how to edit this kind of article.
Edit this article
Battrund
57320 • ULDA_BOSS_16h
Regular 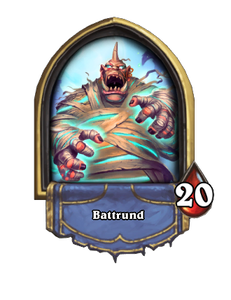 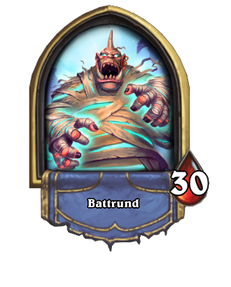 Dimensions: Full • 330 x 410px
Not all of Battrund's minions are mummies. Some got a bad wrap.
Boolean tags
HIDE_WATERMARK
Wiki tags
None
External links 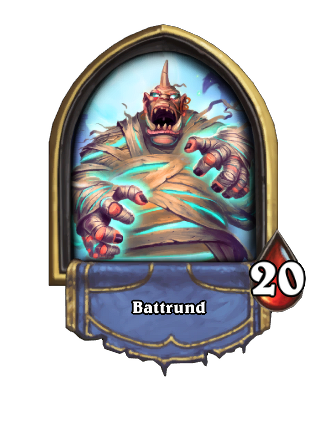 Battrund is a boss that can be encountered initially in Chapter 4 of Tombs of Terror. After completing Chapter 4, this boss encounter will be available in any completed chapter.

These decks correspond only to level 4. If this boss is encountered on level 3, his deck will be missing 5 random cards.

Due to Battrund's hero power all his minions are difficult to kill. Therefore, it is not possible to control the board with an aggro deck, dealing damage only to the enemy hero and forcing the boss to trade, because his minions will not only kill the player's, but also remain on the board, quickly lowering the health of the player's hero. This way of play is not fatal only with having board clears like

Spirit Lash and so on.

Normal deck is quite slow and contains a few minions that can do harm after death. Some of them, such as

Restless Mummy, do not get the value from his hero power at all. Use the general strategy of killing all possible enemy minions to now allow the boss capture the board.

Heroic deck, on the other hand, consists entirely of good tempo minions that are easily able to fill the board with their deathrattles and leave the player no opportunities to intercept it except powerful protection from

Karl the Lost. However, if the boss will play

Abomination, is it possible to easily clear his entire board 1 or 2 times. Besides the good controlling with

First Aid Kit this swarm can be used as advantage in the following ways:

Band of Scarabs since Battrund has 8 minions with 1 Attack. This will either deprive Battrund of the ability to play minions, or he will be able to play them one or two per turn only, which will make it easier to control the board and deal damage to the enemy.

2) Another good passive is

Primordial Bulwark. If it is impossible to take over the board, try to deal at least 10 damage to the boss and wait for lethal damage to the hero.

Arcane Craftiness usually cleans up the board as well as

Defile and at the same time inflicts huge damage to Battrund.

Battrund
Why you wake me?!
Fiend... where? (vs. Sir Finley)
League of... who? (vs. Elise Starseeker)
Brann Bronzebeard
Wakey, wakey!

Battrund
Me need beauty sleep.
So tired.
Was having good dream...

Kitty come back. And again.

Watch out for pet. Mad when tired.

Need big bandages for this.

Battrund is unique to Hearthstone.