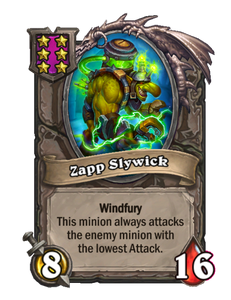 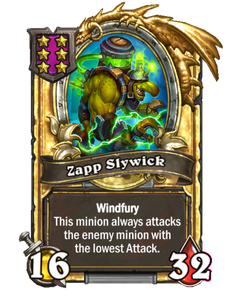 Zapp Slywick is a Tier 6 minion in the Battlegrounds game mode.

Zapp Slywick is best placed on the very left of your board in order to attack first. It is useful to tech this minion into your board to snipe your opponent's key assets; however, it is difficult to buff this minion, so pay attention to the boards of your opponents and note key minions before you buy this. Frequent targets include Baron Rivendare, Junkbot, Soul Juggler, and Mama Bear.

Your opponent may exploit this minion's behavior to guarantee that their Goldrinn, the Great Wolf will die first, which could be disastrous. If your opponent has adapted to this minion being present in your lineup, you should sell it for larger minions.

A very effective counter to Zapp is a single Maexxna or Deadly Spore, which will handily take care of Zapp. An unbuffed Mechano-Egg can also be used to redirect a hit.

Zapp is unique to Hearthstone.