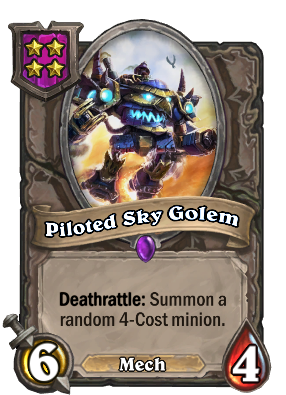 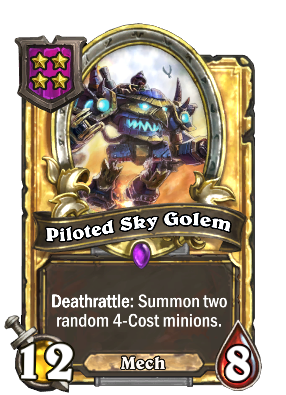 Piloted Sky Golem was a Tier 4 minion in the Battlegrounds game mode.

Piloted Sky Golem was a decent late-game minion in mech and deathrattle strategies especially together with Baron Rivendare, since 4-cost minions have decent stats and many of them were deathrattles that in turn dropped additional bodies such as Piloted Shredder, Replicating Menace and Infested Wolf, it could even drop a replacement Baron Rivendare! It potentially gave your army several extra bodies to refill your board with over the course of combat.

The strategy as a whole was viable for countering late-game murlocs since while they could take down large individual bodies, they lacked the health pools to deal with a large stream of relatively small bodies that was characteristic of deathrattle strategies of the time.

However, it began to face heavy competition in the strategy when Mechano Egg was moved down into the same tier. Piloted Sky Golem was stronger at first thanks to its lower health and high attack of the minion itself, which made it less likely to out-live your Rivendare, but this weakness of Mechano Egg was rectified once it received taunt.

It was often the less consistent option, since multiple 8/8 or 16/16 Robosaurs were often big enough to win the combat on their own compared to a stream of random 4-cost minions. That said, while it had the potential to highroll and beat Mechano Egg with its deathrattle dropping multiple other deathrattles, it could also derail Kangor's Apprentice by dropping a weaker mech like a Screwjank Clunker that may die before your other intended targets, on the other hand bringing back Mechano Egg and Robosaur wasn't a bad outcome.