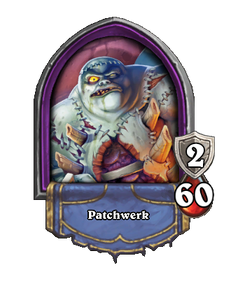 Patchwerk was made with many things, but love was not among them. This misunderstood construct wanders Naxxramas seeking friendship, the one thing that would make him feel complete.

For other appearances of Patchwerk, see Patchwerk (disambiguation).

Patchwerk is a hero that the player can pick in the Battlegrounds game mode. 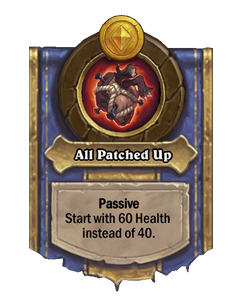 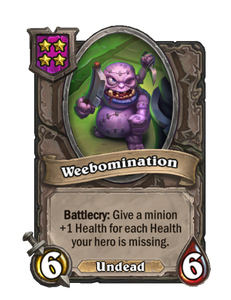 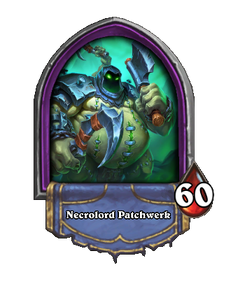 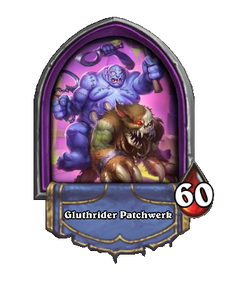 Patchwerk's Hero Power is very simple: you start with an above average Health total. Although this doesn't directly impact most builds or strategies, it can buy you time to upgrade your tavern or find a critical minion when it might otherwise be too risky to do so. You can also more safely pick minions like Wrath Weaver or Vulgar Homunculus early on, as your extra health can absorb more of the self-damage they inflict.

Generally, Patchwerk's Hero Power isn't one you should base your entire strategy around. Rather, its effect works quietly in the background, providing just a little more security to whatever build you adopt. It's not flashy, but if you're lucky, it might mean the difference between victory and defeat.

You can try to rush a high Tavern Tier while not buying many minions as his higher health total will allow you to survive the early game even with very few minions. On turn 1, buy a minion that gets you 2 minions like Alleycat (Battlegrounds), Murloc Tidecaller (Battlegrounds), or Sellemental. On turn 2 use all 4 gold to upgrade the tavern tier. On turn 3 sell one minion to upgrade to Tavern Tier 3 for 6 gold. Then on turn 4 sell the other minion to upgrade to Tavern Tier 4 for 7 gold. This will put you at Tavern Tier 4 on turn 4, but you won't have any minions. Because of his increased health pool, you will still probably be at 30+ health and now can start taking control of the game at such a high tavern tier so early.