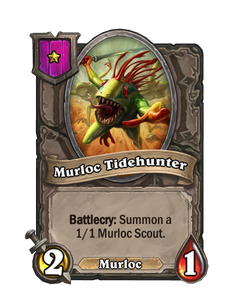 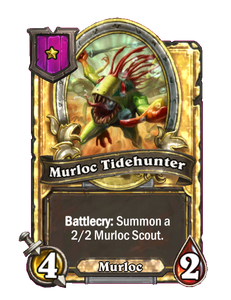 "Death will rise, from the tides!"

Murloc Tidehunter is a Tier 1 minion in the Battlegrounds game mode. 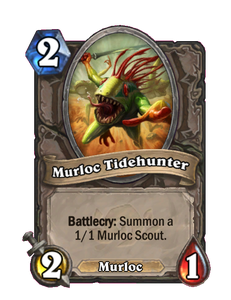 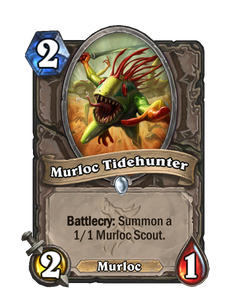 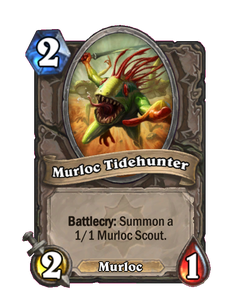 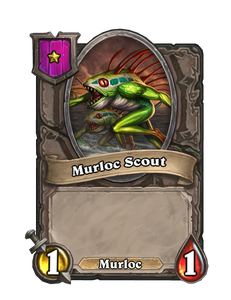 Murloc Tidehunter is the best Tier 1 minion in Battlegrounds, due to the fact that it summons a token. Just like its counterparts Alleycat and Sellemental, this makes it essentially cost 2 instead of 3, as the token can be sold to give you 1 Gold in a later round (most likely the 5 Gold turn to allow you to buy two minions while still having another minion on the board), but unlike those two, Murloc Tidehunter's decent stats spread out among two minions enables it to tie or win against most other Tavern 1 picks, with the singular exception of Vulgar Homunculus. The Tidehunter also has the opportunity to be tripled "twice", as both the main minion and its token will have golden versions if three of them are present on the board. In addition to this, its total of 3 Attack

The token aspect, in addition to being valuable in general, gives it good synergy with Edwin VanCleef and Dancin' Deryl, whose Hero Powers depend on buying and selling several minions a turn. Like Alleycat, it also gives Arch-Villain Rafaam the opportunity to sell the token on the first turn to use his Hero Power, potentially stealing an opponent's minion. This, however, is a risky play, and should be avoided altogether if the opponent has lost Health, as (except in the case of Lich Baz'hial), this means they've bought a Vulgar Homunculus. Similarly it should be avoided if your first opponent is Yogg-Saron as his starter minion is likely to be stronger than yours. In a similar strategy, Pyramad can sell the token to use its hero power on the first turn, essentially turning the tidecaller into a homunculus without the self damage.

In later rounds, this Murloc's strength falls off quickly, but can be useful for Murloc builds; if it can be buffed, with the help of King Bagurgle or Gentle Megasaur, it can easily spiral out of control, like most other Murloc minions. It also serves to buff minions like Murloc Tidecaller or Crowd Favorite, and can provide very good value with Brann Bronzebeard and Khadgar, who will double its effect, for better return on investment. Golden versions of these minions will provide automatic triples, if the board space allows it. A decent choice from Primalfin Lookout, especially if combined with Brann.