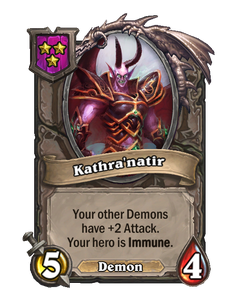 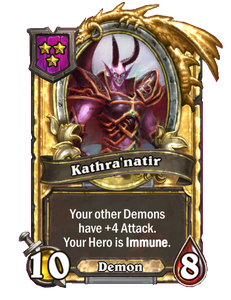 For the boss card in Book of Heroes, see Kathra'natir.

Kathra'natir is a Tier 3 demon minion in the Battlegrounds game mode. He replaced Mal'ganis, now only granting attack to demons instead of health and attack. He retained his ability to make the hero immune. This hero power is only usable when playing the Wrath Weaver minion or playing Lich Baz'hial.

Kathra'natir has obvious strategic synergy with the Wrath Weaver, allowing the weaver to scale by playing demons without taking hero damage. This is especially helpful when playing the Insatiable Ur'zul at the same time, as they both play around cycling through demons. This allows both minions to scale without punishing the players hero health. His passive effect also allows the Soul Devourer to increase the amount of attack it gains when it devourers a demon, increasing the stats it gains by an additional 2 attack.

Use him in demon builds that revolve around playing deathrattle demons or Imp Mama, or use him to scale your Wrath Weaver. However, he is not a stable slot in all demon builds as the +2 attack buff is very low in the mid to late game.