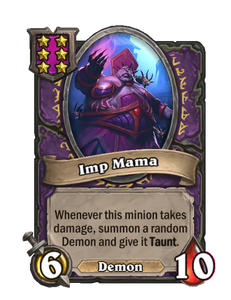 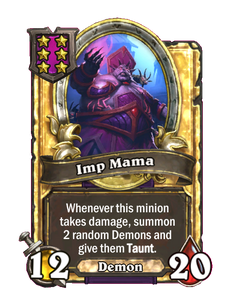 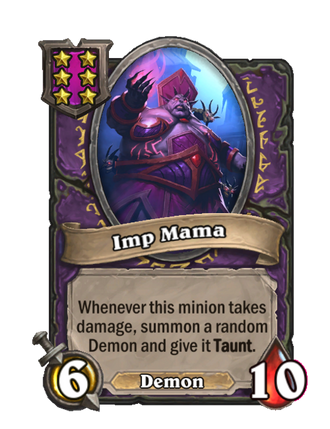 Imp Mama is a Tier 6 minion in the Battlegrounds game mode.

Imp Mama is a fairly weak tier 6 minion on its own, however, it can be buffed through effects such as Nathrezim Overseer and Bloodfury. Imp Mama synergizes incredibly well with Mal'Ganis and Soul Juggler, as Mal'Ganis provides extra stats for Imp Mama and any demons created by it, and Soul Juggler benefits from the extra demon deaths, and is protected by the taunt effect, providing Soul Juggler itself does not have taunt.

Imp Mama is an imp mother.

Imp mothers are a type of demon loyal to the Burning Legion. First seen during the third invasion of the Burning Legion, very little is currently known about them, but their stomachs are known to operate as a kind of portal from which imps emerge.