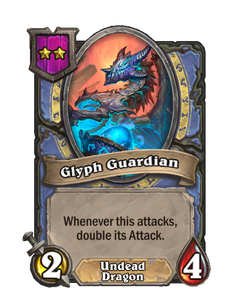 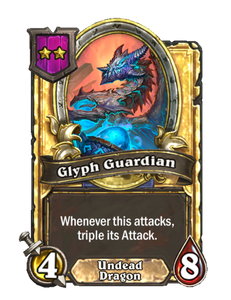 Glyph Guardian is a Tier 2 minion in the Battlegrounds game mode.

A slightly above-average Dragon for the early game. Glyph Guardian scales well with buffs, thanks to its mechanic which makes it rapidly very threatening during the Combat phase. If you are lucky enough to make it Golden, it can potentially take down a minion as large as Annihilan Battlemaster, since its Attack starts tripling instead of just doubling. Its higher base Health means it may have a chance to survive for a second attack, especially with buffs, and it is good with Nadina the Red for the same reason, as the protection her Deathrattle offers can enable it to grow to truly monstrous sizes. Later in the game, try to position it within your warband so that Divine Shields are negated before it attacks, thereby avoiding wasting its damage.

Overall, this is a decent minion to take early on, as it contends fairly well with those of its own Tavern tier, and if you can keep it around until you find late-game Dragon powerhouses like Nadina or Kalecgos, it can remain a useful and powerful card.