< Battlegrounds
Edit
watch 02:46
The Quarry - The Loop
Do you like this video?
Play Sound 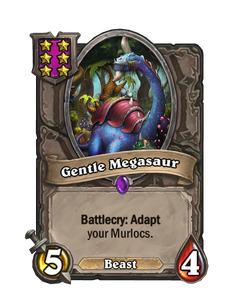 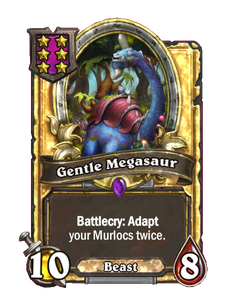 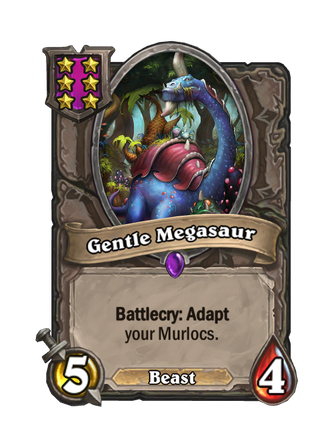 For the collectible version, see

Gentle Megasaur was a Tier 6 minion in the Battlegrounds game mode.

Gentle Megasaur was the endgame goal for every Murloc build, giving all Murlocs a substantial buff. While

Poison Spit that are highly coveted, turned the Murlocs into extremely resilient insta-kill murder machines, which no other tribes can compare.

Massive was useful if you had non-Murloc minions you wanted to protect (usually for mixed builds) or wanted to further boost your stats with Strongshell Scavenger, and

Lightning Speed was dependent on your opponent's composition and your own buffs, such as if you wanted to give a Poisonous Murloc more chances to break through a huge Taunt minion or allow a Divine Shielded Murloc to make better trades.

This was one of the best Battlecries to double with Brann Bronzebeard by far, as it was giving double the chance to get the coveted Poisonous Spit and Crackling Shield Adaptations while also offering a small chance to get both at once, or even combine one of the two with Lightning Speed.