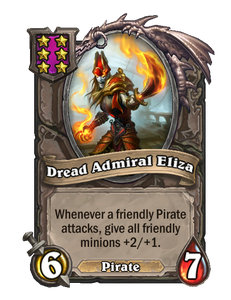 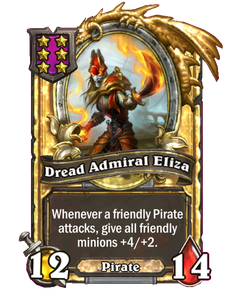 Dread Admiral Eliza is a Tier 6 minion in the Battlegrounds game mode.

Eliza is a very high-tempo Tier 6 minion due to the large boardwide buff it gives, making it a good choice for a Discover off of a golden minion, especially if you have spare Pirates on the board. The immediate strength that Eliza offers can buy the player time to assemble a final composition.

Eliza's main claim to fame is its combo with Scallywag, Khadgar, and Baron Rivendare. When Scallywag dies and the Sky Pirate that its Deathrattle summons attacks and dies, it allows Khadgar to summon more Sky Pirates to attack, with each of them triggering Eliza's ability; Khadgar duplicates the buffed Sky Pirates, thus causing ever-larger Sky Pirates to attack the opponent's minions, and Baron Rivendare allows Scallywag's Deathrattle to trigger multiple times. The combo is easily assembled, as the other pieces are relatively common and rarely contested, and the build can compete with all but the strongest late-game builds.

Defender of Argus is necessary to give Taunt to the Scallywags to ensure they die before your other combo pieces, and it is also necessary for the player to have only six minions to make space for Khadgar to summon extra Sky Pirates. Also, if one of the Sky Pirates fails to die during its attack, it will take up board space and prevent Khagdar from summoning more Sky Pirates, stopping the combo, allowing the build to be countered by low-Attack Taunt minions.

Dread Admiral Eliza Goreblade is an undead pirate located in the Temple of a Thousand Lights in Azsuna. She is the wielder of the Dreadblades. Her ship is Horizon's Edge.