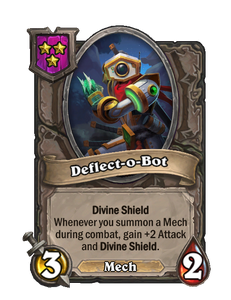 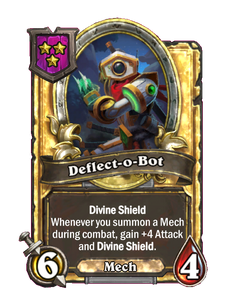 Deflect-o-Bot is a Tier 3 minion in the Battlegrounds game mode.

Like its predecessor Cobalt Guardian, Deflect-o-Bot is the cornerstone of Mech, Divine Shield, and sometimes Menagerie and Deathrattle builds. Its ability grants it Divine Shield whenever a Mech is summoned - for this reason, it is best played alongside another Mech, to give it the Shield immediately. Not only is it a decent mid-game minion on its own, but, if it can be refreshed via spawning Mechs, through the use of minions like Mecharoo, Harvest Golem, Security Rover, or, less reliably, the various Shredders, this will make it very annoying to deal with for the opponent, even with its low base Health.

The fact that it has a chance to absorb several hits means that any Attack buff can make it threatening, especially considering its Attack grows with each Mech summoned, and this grows linearly with each Attack buff and Divine Shield refresh. Minions like Screwjank Clunker (especially in combination with Brann Bronzebeard) or Replicating Menace are generally good purchases whenever one has a Deflect-o-Bot. Notably, tripling this minion is not always a good idea, as having several refreshing Deflect-o-Bots can make a board practically invincible, even later in the game. On the other hand, if you have many Mech token-spawners, making it Golden to scale its attack better to make extra space can be a viable option. Also avoid Taunting it with Annoy-o-Module, as this will give it less chances to deal damage while its shield is down.

Placement for the Deflect-o-Bot is important - it is generally valuable to place it on the far left so it can attack quickly (as it will lose its Divine Shield, giving it the chance to refresh as soon as a Mech spawns). Try to place Taunts away from it, as cleave effects like Foe Reaper 4000 can render it vulnerable before it even attacks. Additionally, it is heavily advisable to put a token summoner like Harvest Golem immediately after it to refresh its Divine Shield as soon as possible.

Compared to Cobalt Guardian, it gains Attack with each Mech summoned, allowing it to scale better in pure Mech builds. It also starts with Divine Shield, which sometimes makes things more convenient to use than Cobalt Guardian when first bought, where you need to buy another Mech to activate its Divine Shield, as well as making it more resilient when resummoned with Kangor's Apprentice or the Lich King's hero power. As a downside, it has about half its base stats, slightly reducing its power in non-pure Mech builds.