Hearthstone Wiki
Register
Don't have an account?
Sign In
Advertisement
in: Battlegrounds cards subpages, Pages with no result queries, Beasts 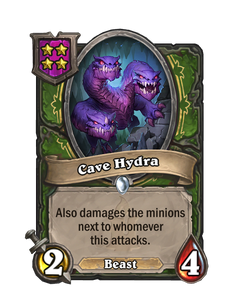 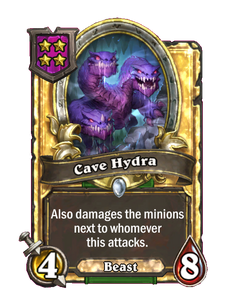 Can be upgraded into a Cave Lurker.

Cave Hydra is a Tier 4 minion in the Battlegrounds game mode. 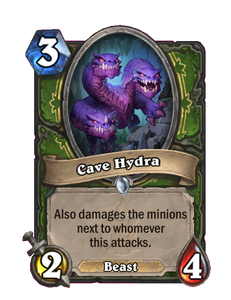 Cave Hydra is one of the two sources of AoE damage in Battlegrounds, the other being Foe Reaper 4000, which in turn allows it to damage enemies hiding behind Taunts. However, its low base stats hinder its ability to take down minions. It is normally best to position this minion on the left to clear Divine Shields, allowing your larger minions to do their full damage. Alternatively, it also makes an excellent target for buffs, allowing it to potentially kill multiple minions in a single strike, although buffing it to a significant value can be difficult due to its high tier. If buffing Cave Hydra, avoid giving it Taunts from Houndmaster or Defender of Argus to maximize its chances of survival.

Aiming for a golden Cave Hydra is not recommended unless you get offered two at the same time, as the only bonus from tripling it (aside from the Triple Reward) is a minor +2/+4 buff, which is fairly inefficient for your money. Virmen Sensei and Lightfang Enforcer are both more efficient buffers.