Cargo Query Error: Error: No field named "cycles" found for any of the specified database tables.

Brann Bronzebeard is a Tier 5 minion in the Battlegrounds game mode. 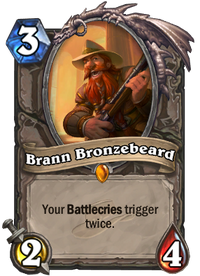 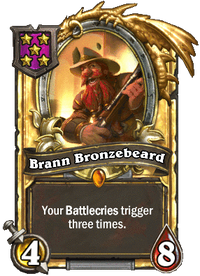 Brann Bronzebeard is a useful addition to warbands that rely heavily on Tavern-phase buffs, such as Murlocs, Menagerie, and Demons. Doubling your Battlecries allows your primary powerhouse minions to greatly snowball as long as you keep Brann around, and he makes boardwide buffs like Coldlight Seer, Strongshell Scavenger, and Menagerie Jug much more powerful.

Brann's main weakness is that he effectively leaves you down a minion in the Combat phase, as Brann has extremely poor stats and his lack of tribal synergies make him difficult to buff. The best value you can usually get from Brann in combat is using him to pop a Divine Shield or soak up cleave damage.